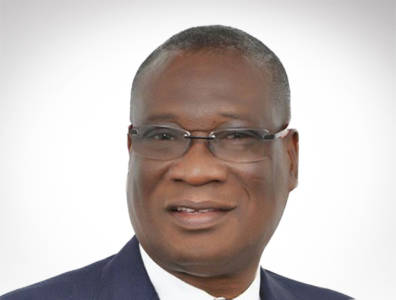 Exxon’s arrival is a vote of confidence in Ghana’s oil and gas potential.

Kofi Koduah Sarpong, chief executive of the Ghana National Petroleum Corporation (GNPC), talks to TOGY about the milestones of Ghana’s entry into oil and gas production and what the country expects from IOCs moving forward. GNPC undertakes exploration, production and trading of oil and gas.

This interview is featured in The Oil & Gas Year Ghana 2020


What have been the most significant achievements of the past year for GNPC?
There are a number of exciting achievements in the past year. A key one has been the completion of the first phase of the Takoradi-Tema Interconnection Project (TTIP) to enable west-to-east reverse flow of natural gas. Also, there was the successful relocation of the Karpowership barge from the Tema Fishing Harbour to the Sekondi Naval Base.
These two interventions are key to ensuring full utilisation of Ghana’s domestic gas for power generation and other uses – both in the west and the east. The gas used will be significantly cheaper and cleaner than heavy fuel oil (HFO), diesel or other liquid fuels. The economic and environmental benefits are therefore very obvious.
On the exploration front, there have been some seismic surveys conducted. Exxon has got a local partner and we expect more in-country visibility. But I’d say that the industry is now moving in the direction that we expect. This industry is patient, and it is only after you drill that you can assess whether there are commercial quantities of hydrocarbons.
Aker came to Ghana in 2018. We are working with them to get their development plan approved. This government is pro-business and we should settle that very soon. We should see more activity from Aker in 2020. They have already done some drilling to increase their reserves, which is quite reassuring. There is a lot of work to be done, but we are confident that we’ll get there.
AGM [Petroleum] has also conducted some drilling and is currently assessing results. Initial assessments indicate commercial quantities, so we expect some form of development there as well.
The Springfield discovery announcement attracted a lot of attention, but there is still a fair amount of work to be done for us to see what the volumes really are. The water-oil contact level has not been established yet, so additional drilling is necessary to confirm commercial volumes. Considering that their work takes place in a field adjoining the Aker block (Deepwater Tano Cape Three Points block), a successful outcome would not be so surprising.
GNPC is also doing work in the Voltaian Basin onshore, where the primary surveys seem to indicate the presence of hydrocarbons. We are moving into another stage, with a contract being signed with the original seismic company, BGP-BAY, to acquire additional 2D-seismic lines to add to the already acquired 1,872 line kilometres. We have identified two prospective areas, and hopefully in the first quarter of 2020, the acquired seismic will be integrated with results from the satellite imagery technology to determine the scope and decide whether we can drill a well before the end of 2020.
Things are going well there. We have managed the community relations, and our social performance on the ground has been very good.
On the deep offshore, we’ll not lead but will play our role with private partners to push activities there. However, we are going to choose a partner to work with on the GNPC Reserved GH-WB-01, which is a shallow-water block. We’ll do our best to get going on that, alongside the onshore Voltaian Basin, which has a huge potential to open up a huge frontier for E&P activities.

Beyond the vote of confidence, does the arrival of ExxonMobil in Ghana establish the country’s hydrocarbons maturity?
Ghana’s oil and gas industry is still young but promising. It is therefore good to have the big players here to take this journey along with us. Obviously, Exxon’s arrival is a vote of confidence in Ghana’s oil and gas potential and in the government’s economic policies. Companies like that are blue-chip companies that tread cautiously. For them to open offices and start working in Ghana means that they have confidence, not only now but in the long-term promise of Ghana’s oil and gas industry, political stability and economic growth of the country. That is quite a positive sign.

On the local content front, what progress remains to be made in the industry and what role is GNPC playing in spearheading this effort?
For local content, having the laws in place is one thing, but getting companies to actually make the effort is another. IOCs haven’t been too helpful, I must say. Tullow more or less tried to shift maintenance to overseas companies and has not been opening itself up to many locals. This is not a good sign, and it promotes the concentration of wealth within a few individuals and companies.
We need to be true to the meaning of local content. Maybe in the future, companies should look at the way these deals are structured. We need a strong operator for a 100,000-bopd field, but Tullow is now delivering below that. At this stage [as of January 2020], their work programme for 2020 has not been approved.
For our part, GNPC is doing its best. We have a JV partnership with GNPC-Technip Engineering Services Limited for capacity building and provision of engineering services. Also, we have an E&P subsidiary, GNPC Exploration and Production Company Ltd. (EXPLORCO), which has acquired commercial interests in six blocks and is in a joint operating company in two blocks. These are both aimed towards building local expertise.

How do you assess Ghana’s gas potential today, and do you expect a significant shift in the country’s gas policy moving forward?
Gas opens significant opportunities for every country. If you have it, you are lucky because it is a springboard for petrochemical industries. Ghana is looking at fertiliser plants, ethanol plants and other petrochemical facilities that can benefit from the mass production of gas.
Among the fields we have now, the only one with non-associated gas is the one produced by Eni [Sankofa field]. The other fields have associated gas, which for all intents and purposes should be cheap. Of course, you need to do some level of reinjection, but the rest can be piped. We need to open up to these petrochemical industries to be able to move forward from just gas-to-power and be able to do many other things with the gas.
If we move into petrochemicals, maybe we’ll need more production of cheaper gas. However, Sankofa gas is too expensive. Whatever the motivation, it is done and we have to live with it, but we won’t allow this to happen again, as the gas from there is too expensive. Moving forward, we should look to other fields to meet our gas needs. Aker, AGM and Springfield could produce gas in the next three or four years.

Is the ExxonMobil arrival playing a role in this petrochemicals ambition, given the fact that the company has well-established downstream experience?
We are not expecting production from ExxonMobil for at least seven, eight or maybe even 10 years, so we are not factoring this in for the intermediate term. It could come in a decade, but if their initial assessment is good, we may want to encourage them to use their own gas when they produce. The Aker field or Eni’s Block 4 may also be able to give us more gas.

How important is technology penetration in the work done at GNPC and how do you expand your technological horizons by working with partners on technology exchange and dialogue?
We haven’t been developing technology, but we are very experienced at using it and the advice we have given to partners has been appreciated. Over the past 35 years, we have gathered a lot of knowledge and experience, and we are seeking more technology transfer. We aim to eventually become an operator by first working alongside a new operator that would be able to accommodate our desire to get more involved over time. This is on our agenda, and we would like to see more of that in the Voltaian Basin onshore, which is less problematic than offshore.
We are working on building our capacity by sending our staff on secondments to various operators while also sharing fruitful ideas with them to advance the work. They seek our opinions, and we are getting more and more involved. We could also look into becoming operators in the shallow-water blocks, but we are moving more aggressively towards operatorship in the onshore blocks first.

Looking back over the past decade, what do you see as the country’s most remarkable achievement within the industry?
Following the initial Jubilee field and Eni gasfield discoveries, the story has been all about whether we could strike agreements with credible partners and at what level local companies can play.
It is with this background that His Excellency the President is to be credited for working to make sure that whatever obstacles and existing bottlenecks are removed so that more investors can come into the country. One company benefiting from this atmosphere is Aker, which is awaiting approval of its plan of development to advance in its work.
The recent discovery by Springfield is a local content success story, which also demonstrates H.E. President Nana Addo Dankwa Akufo-Addo’s commitment to the country’s local content drive.