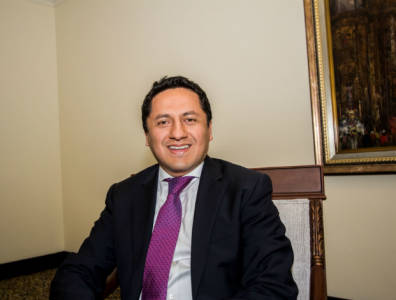 The biggest challenge is for Ecuador to continue its policy of becoming an attractive nation for investment.

Share of Yasuní National Park that will host oilfield activityLess that 0.1 percent

Co-ordinating Minister of Strategic Sectors Rafael Poveda discusses Ecuador’s balancing act between oil developments, communities and the environment. The objective of the Co-ordinating Ministry of Strategic Sectors is to guide and articulate public policy between Ecuador’s hydrocarbons, electricity and water industries, collectively known as the country’s strategic sectors.

What are the biggest challenges that Ecuador faces in maintaining its production growth? How will it confront these obstacles?

The biggest challenge is for Ecuador to continue its policy of becoming an attractive nation for investment. We have already taken great steps towards political and social stability, steady economic growth, convenient operational costs and a clear regulatory framework. This will secure the necessary investment to maintain hydrocarbons production, both for new and mature reserves. Technical challenges for Ecuador have included the full implementation and development of secondary and enhanced recovery projects, the location of new reserves in areas adjacent to producing fields and advancement of 3D-seismic techniques in the country.

Increasing management efficiency in public companies as well as beginning production in new fields, such as the Ishpingo-Tambococha-Tiputini (ITT) oilfield complex in block 43, Sacha in block 60, Pungarayacu in block 20 and new gasfields in the Gulf of Guayaquil have also been challenges for Ecuador.

What security measures are going to be implemented at block 43 to eliminate the potential damages of accidental spills?

Of the 1.03 million hectares (10,300 square kilometres) that constitute the Yasuní National Park, oilfield activity will take place in less than 0.1 percent. This will be possible because the development of the ITT reserves will employ new techniques and practices as well as the best available technology. The impact of operations will be minimised by the use of platforms with up to 30 wells each, all of which will be able to use directional drilling. The ITT crude will be processed outside of the park at the Edén Yuturi field, about 90 kilometres away. The pipelines from the block will be buried and continuously monitored. There will also be no access roads, only ecological paths to the block, and people will not be allowed to settle in the park. The Ministry of the Environment is going to monitor the oilfields to enforce the highest environmental standards within in the park’s boundaries. This will reduce deforestation, illegal logging and danger to species living in the zone.

In protected natural areas, we will apply a special code of conduct created by firms operating in areas of high socio-environmental sensitivity. This includes the monitoring of facilities and construction; reduction and control of emissions; control of liquid discharges, including runoff; the creation of pipeline right-of-ways that minimise the amount of clearing done and which do not affect sites of ecological, archaeological or ethnic interest; and adequate management of the solid waste generated onsite.

What has the government done to build and maintain good relations with local people living within petroleum-producing regions, especially indigenous tribes?

Ecuador has a historical debt to the Amazon region, which has been a pillar of the economy in recent decades but had been left virtually abandoned, without any services. Since 2007, the Correa government has embarked on a policy of transparent management of natural resources, especially the way that they relate to the indigenous people and nationalities in the region.

In addition to the preservation of indigenous territories, the Hydrocarbons Law of 2010 has codified the principle of redistribution of wealth, justice and equity. Furthermore, the government created the public company Ecuador Estratégico, which puts into practice the mandated redistribution efforts associated with mineral and petroleum exploitation activities. Between 2012 and 2014, a total of $753 million was allocated to projects in education, health, housing, roads, electricity supply, among other sectors, in communities affected by resource development.