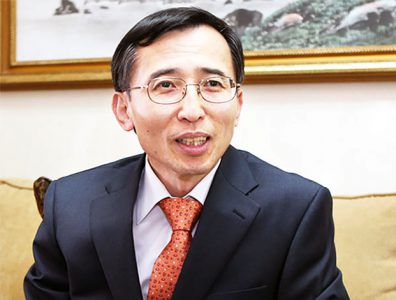 The two main pillars of co-operation between South Korea and Qatar are exchange of energy from Qatar and technology from South Korea. We feel there is mutual benefit in this relationship.

South Korea has had relations with Qatar since 1974, contributing its expertise to the successful development of infrastructure projects at Ras Laffan starting in the 1990s. South Korean Ambassador to Qatar Keejong Chung talks to TOGY about the significance of the two countries’ bilateral relations and what the future holds for them.

How is South Korea involved in developing Qatar’s energy-related infrastructure?

Between 1997 and 2000, South Korea and Qatar collaborated to develop infrastructure at Ras Laffan and Nakilat, where Qatar’s LNG terminals and transport facilities are based. Historically, there has been an exchange of technology between the two states, with South Korean engineering companies providing their expertise in the development of Qatar’s LNG infrastructure and export capacity.

The two main pillars of co-operation between South Korea and Qatar are exchange of energy from Qatar and technology from South Korea. We feel there is mutual benefit in this relationship. Trade between the two countries is valued at about $30 billion per year and the majority of this is hydrocarbons products exported from Qatar to South Korea.

What is the scope of South Korea’s trade with Qatar with respect to hydrocarbons products?

The largest proportion of trade between South Korea and Qatar stems from LNG purchases. South Korea is the second-largest importer of LNG in the world following Japan. Qatar is the number-one supplier to South Korea, providing an average of 10 million tonnes of LNG per year, and a little more than 100 million barrels of oil per year.

About 30 percent of South Korea’s LNG demand is satisfied by Qatar and most of that is priced on 25-year contracts. In South Korea, imported LNG and oil is mainly used for heating and transportation. The country has a long winter season and its only domestically produced energy is coal.

The government’s policy of adopting a cleaner fuel mix means than South Korea is keen to increase the proportion of energy production that is derived from gas-fired power stations. South Korea is therefore increasingly reliant on Qatar for its natural gas needs. However, the volume imported is not expected to change significantly in the near future as most of South Korea’s trade is based on long-term contracts.

How have South Korean companies contributed to the development of energy-related infrastructure in Qatar?

In November 2014, a memorandum of understanding was signed between Qatar and South Korea to set up a committee that would oversee joint ventures between both nations when entering new markets. At the recent summit in Doha, the state-run Qatar Investment Authority and the South Korea Investment Corporation agreed to create a fund worth $2 billion to engage in such joint ventures overseas. In addition, the arrangement aims to encourage Qatari foreign direct investment into South Korea’s economy.

South Korean company LS Cable and Systems has installed cable infrastructure capacity between Halul Island and Ras Laffan Industrial City for Qatar Petroleum. The project, valued at $400 million, is designed to install two 100-kilometre long circuits of 132 kV cables for efficient electric power supply between the two sites. The 200-kilometre circuit will transmit 100 MW of power and is one of the many examples of Korean companies supporting infrastructure development in Qatar.

What kind of diplomatic efforts have the two countries undertaken to tighten bilateral relations?

Click here for more news and features from Qatar.