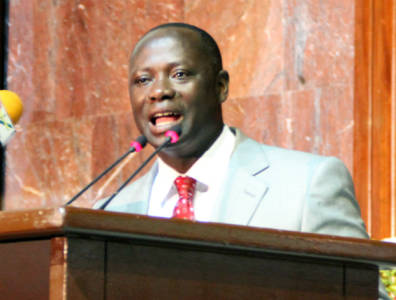 Ghanaians know what the oil revenue is being used for because laws govern the spending.

Oil for the people: How oil money is being funnelled towards helping Ghanaians

Emmanuel Armah-Kofi Buah, appointed minister for energy and petroleum in January 2013, describes how oil money is being funnelled towards helping Ghanaians. The ministry has a three-point plan to focus its efforts that include developing an energy economy; securing a reliable supply of high quality energy services; and becoming a major oil exporter by 2012 and electricity exporter by 2015.

What are the main factors behind the recent success of Ghana’s oil and gas operations?

First of all, one needs to realise that Ghana has become an investment destination for many big corporations. This is because the business climate enables a company to get returns on its investment. We have always worked to maintain and improve on that, not to mention the political stability that the country currently enjoys. These are the fundamental issues that make oil companies want to join the fray.

The business climate also has a lot to do with the transparent legal atmosphere we have cultivated. We made Ghana a place where anyone can come and do business. We are able to give a definite answer to business people that they can invest billions of dollars in the country and be sure that the state will give them the protection that they need when they go into business. More importantly, there’s also going to be a return on that investment.

We’re working to make sure that whatever benefits the state gains will also benefit the people of Ghana. We have passed the petroleum revenue management act. Within it, there are provisions to allow the people of Ghana to be in control of how the money is used. We have a public accountability committee made up of people who audit the account on a yearly basis and make a report.

What has the Petroleum Resource Management Act delivered to Ghanaians?

The Petroleum Revenue Management Act 2011 (Act 815) provides clearly defined guidelines for managing revenues from the upstream oil and gas sector. It also commits the bulk of the oil revenues to a shared growth fund to finance investments in human resource development and other productive infrastructure such as education, health and agriculture.

The act also makes provision for a public interest and accountability committee, a citizen-based committee responsible for an independent oversight of the management of petroleum revenues, as well as for consulting the public on setting priority for the spending of petroleum revenue. The public interest and accountability committee has been constituted and has commenced business. The idea is to make sure oil and gas revenues are used as a catalyst to strengthen other sectors of the economy such as agriculture, health, infrastructure and development.

The act also makes provision for a public interest and accountability committee, a citizens’ group responsible for an independent oversight of the management of petroleum revenues as well as for consulting the public on setting priority for the spending of petroleum revenue. The committee has been constituted and has commenced business. Ghanaians know what the oil revenue is being used for because laws govern the spending.

How developed is Ghana’s downstream activity at the moment?

We are continuing to attract more investment in the Ghanaian downstream sector and the economy is expanding fast. Demand in Ghana has increased from 40,000 to close to 70,000 barrels of oil a day. The Tema oil refinery can process approximately 45,000 barrels per day. The refinery’s capacity is not up to the demand of fuel products in the country. That is why we have plans to expand it and make it more efficient by modernising equipment. Ghana’s doors are also open for investors to come in and construct new refineries.

The president has said is that that he is going to end the electricity crisis in Ghana. How can he do this?

Ghana’s economy is expanding fast. We need to increase power generation capacity by at least 200 MW every year. We project to have about 5 GW increase in demand just in the next five years or so. We need to keep our eye on the ball. We’re going to continue to attract the independent power producers.

The government has vigorously pursued development of major power projects that are in the national interest. Consequently, the total installed generation capacity in the country has been increased from 1.81 GW in 2009 to the present 2.445 GW by the addition of 635.5 MW of thermal generation: Tema Thermal 1 Power Plant 126 MW; Tema Thermal 2 Power Plant 49.5 MW; Sunon Asogli Power Plant 200 MW; Takoradi (T3) Thermal Plant 132 MW; CENET Power Plant 126 MW; Solar Plant at Navrongo 2 MW. In addition, a 133-MW unit from the Bui Hydro project will be brought online and hopefully complete the whole project in the third quarter of 2013.

The gas infrastructure project is on course (to deliver natural gas from the Jubilee field). It’s expected to be completed by the fourth quarter of 2013. Other companies have also discovered large volumes of gas and they tend to develop that and bring that gas onshore.

What is the status of the new exploration and production bill, PNDC Law 84?

It’s been very helpful to Ghana. Clearly, when we discovered oil we realised that we need to strengthen that law in terms of environmental provisions, local content and dialogue. We’ve made a lot of progress with the new law. We will then inculcate all the ideas and suggestions and forward it straight to the cabinet and parliament. We are right on track. A draft exploration and production bill, which will address all the key elements such as the use of best practices and concern for the environment, is currently being considered by stakeholders for inputs.

Where do you see the best prospect and most interesting Ghanaian oil and gas project?

The good news is yet to come. There’s a lot of excitement about the western part of the country. The Accra-Keta Basin makes the western basins look like a joke. The greater secret for Ghana is that we haven’t even begun seismic surveys on 40 percent of our land yet. The country is going to be a strong exploration country in the near future. We will make sure this will a blessing and not a curse for our people.

Ghana is poised to cement its position as a serious oil and gas producer and will go all out to create the environment for investment in this area. Exploration is ongoing and more discoveries are being made. The Jubilee field discovery and the discoveries thereafter have de-risked exploration activities in country. Nevertheless, Ghana’s hydrocarbons potential has not been fully exploited. The government has put a favourable fiscal and regulatory regime in place for the exploitation of the country’s resources. The government is therefore reaching out to oil companies and other investors to explore and develop the country’s hydrocarbons resources.