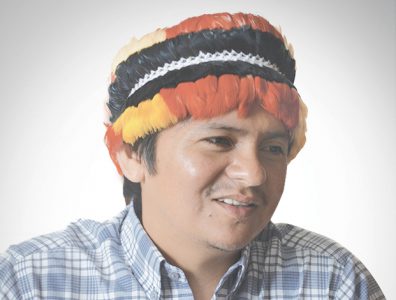 “Upstream operators should be obligated to demonstrate how they intend to minimise their impact on the environment and respect the rights of indigenous communities.”

Number of communities represented by Aidesep1,600

Henderson Rengifo Hualinga, president of the Interethnic Association for the Development of the Peruvian Rainforest (Aidesep), talks to TOGY about recent disputes between local communities and oil companies. Aiming to protect the rights of indigenous communities, Aidesep represents 93 federations, nine regional organisations and more than 1,600 communities in Peru’s Amazon Basin.

What are some of the benefits and problems that oil development work brings to communities living in Peru’s rainforest?
Geographical obstacles have prevented the Peruvian government from providing indigenous tribes with some basic necessities. Many of these communities lack access to healthcare, education, services or infrastructure. In the past, when oil companies entered the jungle, they rapidly took on the role of the government.
Often these companies introduce basic necessities such as education, first-aid kits and health stations. Although these services are the basis of cohabitation between native peoples and oil workers, they lead to local dependence on energy companies. Local communities develop economies based on these services.
In addition, the indigenous tribes’ traditional way of life is disrupted by environmental damage. Many activities that once helped them survive independently are no longer possible.

With the rise of protests against its operations, how can Pluspetrol resolve its problems with the local population in block 1-AB?
The area around Pluspetrol’s development in block 1-AB, also known as block 192, has hosted oil activity for more than 40 years. Indigenous communities living there have already experienced what life is like with oil firms as neighbours. Block 1-AB has suffered significant environmental damage, with oil leaking from wells and poor disposal of drilling fluids and other waste.
The local people have seen the negative environmental and social impact that these developments bring, such as a decline in wildlife numbers and a lower quality of drinking water, which has sickened many residents.
Coexistence has broken down. The locals want to eject oil development. In accordance with Peru’s law on consultation with indigenous peoples, companies must undertake a prior consultation process and obtain community consent to continue with their projects.
The regional government from Loreto and indigenous organisations such as the Federation of Indigenous Communities of the Corrientes River and the Federation of Native Communities of the Ampiyacu have been present for these negotiations, which have been inconclusive. The communities have stated that they will participate in the consultation process, although this does not mean they have accepted any of Pluspetrol’s terms. Many of the indigenous tribes have expressed concern that further environmental damage will ruin the wildlife population and land on which these communities depend.

What do you think of the existing legislation on hydrocarbons and indigenous communities? How can it be made more effective?
The legal framework in Peru includes a prior consultation law that was passed by the current government. The law contains a number of environmental statutes that aim to regulate companies doing business in Peru.
However, there is also legislation that has negative effects. For example, Law 30230 allows the government to fast-track projects in an effort to promote growth. Laws such as these often endanger the territories of indigenous populations. In the current environment, indigenous communities are demanding that oil companies be placed under strict regulations.
Upstream operators should be obligated to demonstrate how they intend to minimise their impact on the environment and respect the rights of indigenous communities.
Companies should only be allowed to proceed with projects once these basic requirements have been met. Failure to meet these minimum requirements should result in companies losing their hydrocarbons production rights.

What effect do major infrastructure projects in the jungle, such as the Southern Peru Gas Pipeline, have on indigenous populations?
We are in talks with local communities about this pipeline. They are completely rejecting the construction of the pipeline. They believe it endangers their welfare and protects only the interests of energy companies. The issue remains unresolved because it has not been discussed in an assembly by all the local communities.
The government should have a contingency plan to prevent accidents and minimise the negative impact of mega-projects on indigenous tribes. These communities live in a fragile ecosystem. When their water sources are polluted, the entire community’s way of life is compromised.