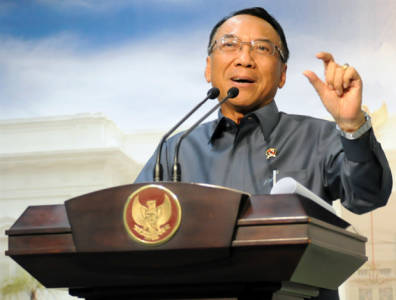 The government has made efforts in order to attract investments in new refineries and in the expansion of existing refineries.

Jero Wacik, Indonesia’s minister of energy and mineral resources since October 2011, discusses recent regulations on upstream oil and gas activity as well as the country’s unexplored potential in the eastern part of the country. The ministry is tasked with establishing energy independence, increasing the added value of domestically produced energy and mineral resources and providing benefits for Indonesian people.

How does the government balance the needs of corporate buyers with the desire to increase revenues under the production split scheme?

This balance is laid out clearly in the current regulation. Based on the petroleum and natural gas law, the control by the state shall be executed by the government as the holder of mining concession. Government regulations on upstream oil and gas state that in the absence of domestic demand during any given time period, the contractor can sell natural gas to the international market after receiving approval from the minister of energy and mineral resources.

How can investors be reassured about cost recovery rates after the introduction of Government Regulation 79 in 2010?

The government expects that there will be a special treatment in the form of fiscal facility for the production-sharing contracts (PSCs) companies that signed after 2010. For example, these companies will not be levied by land and building tax in the exploration stage, with the revision of the Directorate General of Taxation regulation as of April 2012. There is a need for exemption of import duties for upstream activities, given the high risk of exploration projects and no certainty that such exploration will result in discovery.

As the country moves exploration further east, what challenges does the ministry expect?

There are areas located in eastern Indonesia that have a potential that has not yet been explored. The challenge the government faces is the need for the addition of new data in this frontier area, while also providing attractive terms and conditions for potential investors. A major requirement in eastern Indonesia is infrastructural improvement, which is directly aligned with incentives for the development of natural resources. A field discovery may not be economically viable due to the lack of infrastructure facilities supporting development.

To what extent will the addition of unconventional gas reserves revolutionise Indonesia’s energy mix over the coming years?

Based on research by consulting firm Advanced Resources International, Indonesia has 12.8 tcm (453 tcf) of coal bed methane (CBM) potential from its 11 basins, which is larger than the potential of conventional gas, accounting for 4.31 tcm (152 tcf). As of April 2012, there were 50 CBM PSCs signed by the government with the split scheme, after taxes, with the government having a 55-percent interest and the company standing at 45 percent. The target for CBM production in 2015 will be 14 mcm (500 mcf) per day. Furthermore, the target for geothermal power plants in Indonesia will reach approximately 4.5 GW in 2015, up from 1.28 GW in 2012. The development of these resources will contribute to the share of renewable energy in our energy mix by approximately 25 percent, in which the contribution of CBM will be 3 percent and geothermal 8 percent by 2025, while the share of oil will be reduced to 24 percent, gas to 20 percent and coal to 31 percent.

What is being done to encourage employment opportunities for Indonesians?

To encourage employment opportunities for Indonesians we have made a provision that requires oil and gas companies to prioritise Indonesians. We will not approve the use of expatriates for oil and gas companies if national employees are available and competent enough to do the work. In addition, the Migas Strategic Plan 2012-2025 has set a target that the share of domestic workforces will be 99 percent in 2025 in oil and gas industry activities. To achieve this, we have required oil companies to work towards the development of national workforces through the implementation of international assignments, international job swapping and technical development.

What is the government’s plan to increase refining capacity and to develop more downstream industries in Indonesia?

The government has made efforts in order to attract investments in new refineries and in the expansion of existing refineries. The building of new refineries has been classified as a pioneer industry and is therefore justified to receive tax and incentive facilities. To expand refining capacity, the government actively provides the support needed by Pertamina, whose six state-owned refineries account for close to 45 percent of domestic demand for fuel, such as facilitating co-ordination with institutions in order to obtain more tax and fiscal incentives. The government is also planning to build a new refinery using the state budget.