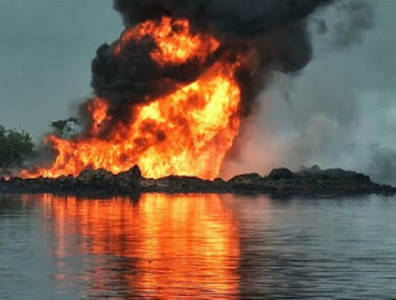 Chevron pipeline blown up in Nigeria

“This action is to further warn all IOCs that when we warn that there should be no repairs pending negotiation/dialogue with the people of the Niger Delta, it means there should be no repairs,” a spokesman for the group posted in a series of tweets. “Any attempt to use dialogue to distract us so as to allow the free flow of our oil will halt the dialogue process.” The militants claimed they “took down” the pipeline, but Chevron did not immediately comment on the damage.

The attack came shortly after the Nigerian government announced oil production had reached 1.9 million bopd, up from a multi-decade low of 1.5 million-1.6 million bopd in August following a series of attacks earlier this year in the oil-producing southern regions of the country. It is unclear whether the talks planned for October 31 between the Niger Delta Avengers, local leaders and the government will go ahead.

“We have built capacity of up to 2.4mbd [million barrels per day] but currently producing about 1.9mbd,” the Nigerian Ministry of Petroleum Resources announced in a tweet on Monday.

Nigeria, which faces a possible debt crisis, is exempt from oil production cuts currently being negotiated by OPEC and non-OPEC producers due to the ongoing violence. In recent weeks, the country has been seeking to shore up its market share by cutting crude prices as well as to attract investments in its petrochemical sector in exchange for oil deals.