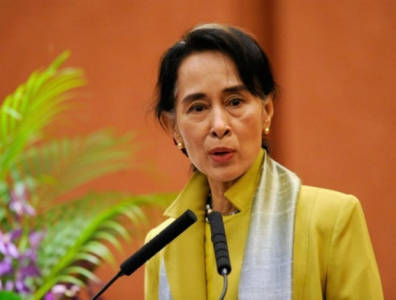 NAYPYIDAW, April 7, 2016 – Aung San Suu Kyi relinquished her post at the Ministry of Energy and Electric Power on Thursday after Myanmar’s Lower House earlier this week approved a plan to have her serve as State Counselor, enabling the Nobel laureate to work in both branches of government, the executive and legislative. Pe Zin Tun will take over as minister of the restructured ministry.

Having won a landslide electoral victory in November 2015, Aung San Suu Kyi’s NLD was awarded four Cabinet posts. In addition to energy and electric power, she also relinquished the education portfolio. Aung San Suu Kyi continues in her roles as foreign minister and minister of the President’s Office.

Myanmar is one of the oldest-known oil producers in the world, with first liftings dating back to 1853. Due to decades-long international sanctions against the military rulers, the country’s oil and gas industry remained virtually cut off from investment until 2011, when the military-backed government embarked on a reform programme. A 2014 block auction saw Shell, Statoil, ConocoPhillips and Total win offshore exploration rights. The country is home to proven gas reserves of 300 bcm (10.6 tcf).

Energy sector shake up in Egypt