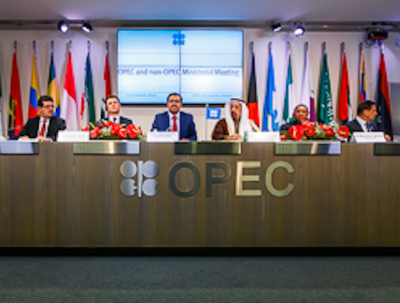 LONDON, March 15, 2017 – Brent crude futures for May were up about 2% to USD 51.90 per barrel at 12:13 pm London time on Wednesday, largely on US inventories data and IEA projections that the glut could disappear.

Oil has had a turbulent week, with reports that Saudi Arabia had increased its production to just over 10 million bopd in February driving prices to several-month lows on Tuesday.

However, the American Petroleum Institute’s latest report released on Tuesday showed that US commercial inventories had surprisingly dropped to 529.1 million barrels last week, after rising more than anticipated to 529.6 million barrels the week before.

Another source of optimism has been the latest IEA report, released on Wednesday.

“We do not predict OPEC production per se, but if current production levels were maintained to June when the output deal expires, there is an implied market deficit of 0.5 million bopd for H1 2017, assuming, of course, nothing changes elsewhere in supply and demand,” said the IEA. It cautioned that OECD commercial inventories had risen in January for the first time in six months and that global demand growth is expected to go down slightly this year.

“Having expanded by 1.6 million bopd in 2016, global oil product demand growth is expected to ease back to 1.4 million bopd in 2017,” the IEA report added. “Early indicators of Q1 2017 demand support this, with slowdowns seen in January in Japan, Germany, Korea and India.”

OPEC’s own report, released on Tuesday, projected a lower growth of global oil demand of 1.26 million bopd in 2017, though the number was revised upward by 70,000 bopd since last month’s projections.

The reported jump in Saudi production last month was also shrouded in uncertainty, as secondary sources indicated the kingdom’s output had actually fallen by 68,000 bopd to 9.8 million bopd, contradicting the figure Riyadh reported to OPEC.

Despite the continuing volatility, bullish projections for a rebalancing of the market toward the middle of the year were echoed also by Goldman Sachs, which said in a research note quoted by Reuters that demand could exceed supply in Q2.

“Our expectations that inventories will draw through 2017 therefore leads us to expect that Brent timespreads will continue to strengthen with the forward curve in backwardation by Q3 2017,” the investment bank added.