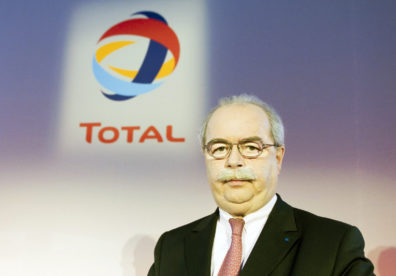 MOSCOW, October 22, 2014 – Total CEO and chairman Christophe De Margerie was killed in an air crash in Moscow on Monday, when his jet collided with a snow plough, three aircrew also died, Russian media said the driver of the snow plough was drunk.

Former CEO and honorary chairman Thierry Desmarest met the board of the French multinational earlier today to propose splitting the CEO and chairman positions which were both held by De Margerie.

Under a plan that needs to be approved by shareholders Desmarest will remain as chairman and head of refining Patrick Pouyanne will join the board and become CEO.

TOGY managing partner Emmanuelle Berthemet said, “I cannot say enough about him. Christophe De Margerie was unique, funny and approachable. We met with him every year, in various conferences and interviewed him in his Paris office. It was always a pleasure to hear him speak. He was witty, outspoken and funny. It is a sad loss for the industry.”

Famous for his uncompromising approach to leading Total into new territories, De Margerie spoke to TOGY for our Libya 2010 book. He said, “National and international oil companies are responsible for producing oil and gas in a safer and cleaner way for everyone’s benefit. We are all part of the same team.”

I cannot say much except that he was a truly unique, funny and approachable character despite his position and influence.

We used to meet him every year in different conferences and were happily listening to his speeches as he was witted, outsopken and funny.

He participated in the success of the Libya book for which we interviewed him in his Paris office.

Sanctions may divert Kazakh oil exports to China
Next