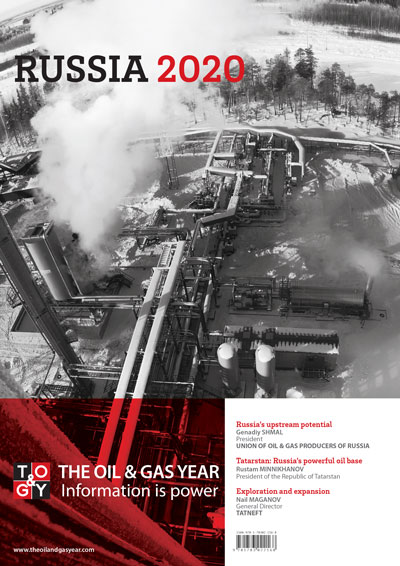 “We ask Europeans to more carefully assess the potential for co-operation with Russia.”

The Oil & Gas Year Russia 2020 highlights the country’s latest milestones in bolstering its position on the global energy market. The Russian oil and gas industry has been moving further east to boost its hydrocarbons production, launching the Power of Siberia pipeline and continuously exploring the potential of Arctic regions and the Northern Sea Route.

“Tatarstan has been the country’s scientific and practical training ground for developing bituminous oil production technologies.”

Rustam Minnikhanov, President of the Republic of Tatarstan

The Oil & Gas Year Russia 2020 spotlights the Republic of Tatarstan, one of Russia’s powerful oil bases. Tatarstan’s dynamic local industry has maintained and even increased its oil production over recent years.

The book features dozens of interviews, including with:

> HMS Group Chairman of the Board & Non-Executive Director Nikolay Yamburenko

Produced in partnership with the Union of Oil & Gas Producers of Russia, this edition of The Oil & Gas Year Russia series provides foresight to investors and companies looking at strategic growth opportunities in the country, at a time when major fiscal regulatory changes and public policies to support import substitution are reshaping one of the world’s largest energy-producing markets.