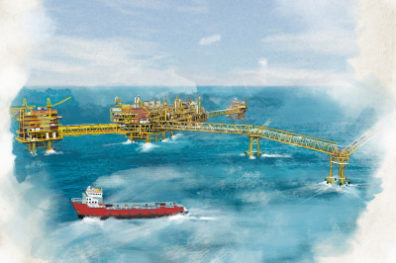 India’s hydrocarbons industry has been traditionally dominated by PSUs and only a very restricted number of independents participate in upstream play.

The shift from NELP to HELP is an attempt to render upstream investments attractive, transparent and commercially attractive.

India’s skyrocketing oil import dependency is increasingly seen as the Achilles’ heel of the country’s booming economy. However, a promising boost to the domestic E&P industry is set to come from the recently awarded 67 Discovered Small Field auction and a new hydrocarbons policy overhaul.

The country felt a chill when the oil import bill climbed to USD 113 billion in the 2014/15 financial year (April-March) and the International Energy Agency projected a 90% oil import dependency by 2040. To eradicate such gloomy scenario, the Ministry of Petroleum and Natural Gas (MoPNG) decided to put 67 Discovered Small Fields (DSF) on the table.
This year’s upstream rejuvenation surprisingly comes from the country’s marginal fields, discovered by Oil and Natural Gas Corporation and Oil India, which remained commercially undeveloped for years.
The DSF, launched in May 2016, is offered under the international competitive bidding (ICB) scheme and a new Hydrocarbon Exploration Licensing Policy (HELP). The auction comes nearly six years after the last bidding round in 2010 to test the waters for the premeditated new exploration bidding rounds. Its objective is to reduce oil import dependence by 10% by 2022 when India celebrates 75 years of independence.
While the last exploration auction in 2010 took place under the New Exploration Licensing Policy (NELP), based on the production sharing formula, the rationale behind DSF is to enable early monetisation and render investment attractive in a low crude oil environment. The liberalised HELP scheme comes at a time when the government of India is promoting the Minimum Government, Maximum Governance vision in order to ease the ways of doing business.

IN DETAIL: The 67 small fields are clubbed into 46 contract areas spread across nine sedimentary basins. According to the MoPNG, the areas hold some 650 million boe of oil and gas, spreading across 1,500 km. They consist of 26 contract onshore areas, comprising 31 fields; 18 contract areas in shallow water, covering 33 fields; and two deepwater contract areas, encompassing three fields. Of the discoveries, 28 are on the Mumbai Offshore Basin and 14 are located on the eastern coast’s Krishna Godavari Basin.
As reserves are already established, the DSF presents lesser risk than greenfield areas where exploration is required. Production from these fields is expected to start in three years for onshore blocks and six years for deepwater blocks.

MAKING SMALL VIABLE: The shift from NELP to HELP is an attempt to render upstream investments attractive, transparent and commercially attractive. This change of colours in India’s hydrocarbons policy entails a single licence for conventional and unconventional hydrocarbon exploration and up to 100% foreign direct investments. Further salient features of the HELP include absence of a signature bonus, oil cess and Custom duty exemption and no restriction on exploration activity during the contract period.
In addition, the Union Cabinet and the Cabinet Committee on Economic Affairs decreased the royalty to 12.5% for onshore, 10% for shallow water and 5% for the first seven years for deepwater and ultra-deepwater on the oil producing fields. A 10% royalty was announced for onshore and shallow water gas fields and 5% for deep and ultra-deepwater production.
The most path-changing feature of the DSF policy is the transition from the profit sharing contracts (PSCs) to the revenue-based scheme (MRCS) and the full freedom of marketing and pricing on an equal basis. In theory, the MRCS is calculated on a liner-scale basis between the lower revenue point and higher revenue point. The bidder offering the highest value of revenue share to the government will be retained, according to the MoPNG.
Under the new MRSC, contractors will have to inform the government at various stages of production about the intended shared quantity of oil and gas. Under the PSC, contractors shared profits once all costs were recovered, whereas the MRSC stipulates that contractors will start sharing profit with the governments from first production.

CONTINUED CHALLENGES: While the MRCS will streamline transparency, equalise domestic profit distribution and minimise government’s footprint in production, from a cost standpoint, the MRCS remains a point of distortion among various shareholders. Additionally, concerns remain that the current low price environment, combined with prevailing aboveground challenges, such as timely permits and complex dispute resolutions, will curb investors’ appetite to venture into India’s upstream.
To overturn industry’s concerns, the MoPNG, together with the public sector undertakings (PSUs), invited potential investors to leverage on existing infrastructure surrounding the small fields. The oil and gas facilities available near the discovered fields typically include oil and gas separation units, treatment and processing units, water treatment and disposal plants, central tank farms, as well as wellhead and process platforms. This proximity could significantly ease the cost and time cycles of the auctioned fields.

A WELCOME TO INTERNATIONALS: India’s hydrocarbons industry has been traditionally dominated by PSUs and only a very restricted number of independents participate in upstream play. The current objective is to invite new international and independent players on board to develop the resources.
The MoPNG took action and called on small and medium-sized enterprises and start-up companies to take part in the current bidding round. According to the chairman of the Association of Oil and Gas Operators, Ashu Sagar, India has only about two dozen operators at the moment, whereas Australia, presenting similar geological feature has about 300.
To invite new entrants, the Directorate General of Hydrocarbons focused on reassessing and gathering fresh data on about 50,000 square kilometres for the National Data Repository. It also set up physical data centres with interpretation facilities across India and in major oil and gas hubs, including in Houston, London, Singapore and Calgary.

TRIAL PERIOD FOR MORE TO COME: Although the new HELP policy contributes to a much-wanted liberalisation of India’s hydrocarbons industry, overseas contractors’ interest to invest could also be offset by the current low price environment. However, since contract rates for oilfield services were sliced in two, independents could leverage on the momentum to reduce costs in goods and services up to 20-50%.
Whether HELP will be a sufficient policy overhaul to curb the trust deficit and leverage on the current low crude oil price remains to be seen. So far, the DSF under the HELP is seen as an experiment for the upcoming exploratory bid-rounds.