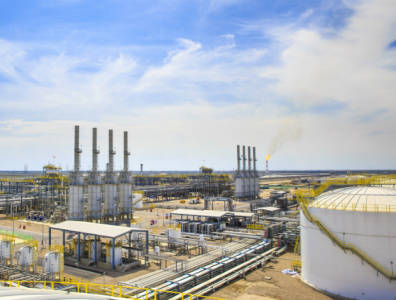 On March 29, 2014, Russia’s Lukoil Overseas began production at West Qurna-2, Iraq’s second-largest oilfield. The company, which manages Lukoil’s international upstream projects, expects output to increase from more than 280,000 barrels of oil per day (bopd) as of August to 1.2 million bopd by the end of 2017, achieving 400,000 bopd by year-end 2014.

On June 5, 2014, Lukoil announced that it had signed an addendum to the West Qurna-2 contract. As per the addendum, the project’s scope will encompass the construction of two 120-kilometre-long pipelines from the Tuba tank farm, which stores oil from the Mishrif central processing facility, to the Al Fao terminal, Iraq’s main export hub on the Arabian Gulf. Called the Tuba-Fao project, it also entails upgrading the Tuba tank farm’s pumping systems and connecting the pipeline to single-point mooring facilities.

MAJOR FIELD, MAJOR INVESTMENT: Located in the southeastern region, around 65 kilometres northwest of Basra, West Qurna-2 has estimated reserves of around 13 billion-14 billion barrels of oil. Current participants are South Oil Company on behalf of the state, with operator Lukoil Overseas holding a 75-percent share in the project and Iraq’s North Oil Company accounting for the 25-percent remaining share. Originally awarded to a consortium consisting of Lukoil and Statoil in 2009, the latter sold its 18.75-percent stake to the former in 2012. In 2013, Lukoil invested $5 billion in the field and is expected to invest $42 billion over the next five years, for a return of $1 trillion over the asset’s lifetime.

In late 2013, the company slashed its plateau production target from 1.8 million bopd to the current 1.2 million bopd. This was done in exchange for extending plateau production from 13 years to 19.5 years. Lukoil Overseas’ contract with Iraq’s Ministry of Oil was also lengthened to 25 years, an extension of five years.

OPERATIONAL OBSTACLES: Production from West Qurna-2 is no easy task, which hosts temperatures ranging between minus 4 degrees Celsius and 52 degrees Celsius. It also had to be cleared of mines laid during the Iran-Iraq war and, as a part of the undeveloped Yamama geological formation, holds gas with high hydrogen sulphide content when compared with the Mishrif layer that is responsible for much of Iraq’s current output. The lattermost obstacle will necessitate pumps and water injection over the course of the field’s development.

DEVELOPMENT STRATEGY: In a press release of April 2012, Lukoil Overseas outlined its development plan for the field, involving a drilling programme that called for the construction of 23 directional wells to be drilled simultaneously on five well pads by diesel-electric rigs. Each of the rigs has a hook load capacity of 450 tonnes, according to the development plan, capable of drilling up to 5,000 metres without equipment remounting. Similar rigs will be used on four other well pads later on in the field’s development, the release added.

The central processing facility at West Qurna-2, able to produce 500,000 bopd from the field, will be built in arrangement with the well pad facilities, alongside infrastructure and auxiliary facilities that include oil gathering lines and water and power supply systems.

PROJECT CONTRACTORS: Kentz completed front-end engineering design work at West Qurna-2 in December 2012, while project management services have been contracted to WorleyParsons of Australia, under a three-year contract signed in 2012.

The same year, South Korean contractor Samsung Engineering was awarded a $998-million contract for engineering, procurement and construction works at the field, which included construction of the central processing facility. Lukoil Overseas also inked a contract with Turkey’s Enka in 2012, to build a 126-MW simple cycle gas turbine power plant and gas treatment unit, alongside distribution systems and gas compressors in West Qurna-2.