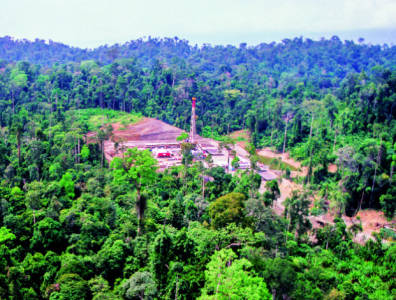 In July 2014, Indian exploration and production company Oil India (OIL) began drilling its second well at the Shakthi block, onshore Gabon, as part of the first step of a three-phase operation at the licence. Once complete, the company will begin the closed-grid, 2D seismic data acquisition for 600 line kilometres.

According a production-sharing contract with the Ministry of Petroleum and Hydrocarbons, which forms the basis of OIL’s engagement at the block, the two wells that fall under phase one are to be operational by January 2017. Oil India general manager Sushil Mishra said, “We discovered 44 million barrels of oil in place. We may enter the exploitation phase by 2018, four years from now. In 2014, Oil India is concentrating on collecting the data and drilling its appraisal wells. However, we expect to be able to produce close to 300 barrels of oil per day, per well when we are ready to begin production.”

Phase two, which is expected to start in 2017 and to end in 2020, will see another two wells drilled and the acquisition of 400 line kilometres of closed-grid, 2D seismic data. It will then incorporate the processing and interpretation of the total 1,000 line kilometres of data. The third phase is set to span from 2020-2023 and will see the completion of the final well of five. However, under the PSC, if during the first phase exploration is not successful, the company may opt out of the remaining stages.

A GENTLEMEN’S AGREEMENT: OIL and its partners originally signed a PSC with the ministry for the Shakthi block in Libreville in 2006. An aeromagnetic survey was completed in 2007, which covered around 36,400 square kilometres.

The company then began a closed-grid, 2D-seismic survey that spanned 1,039 line kilometres. Based on the data gathered, OIL chose select areas for 3D-seismic surveys over an area of 140 square kilometres. Subsequently, two wells were drilled and, while the first found oil at 200 metres, the second well was dry.

OIL then provided a replacement well, the Lassa-1, and on July 23, 2013, struck oil again. The discovery made way for entry into the existing nine-year agreement starting in 2014, which set out the three-phase agenda, with each phase set to last three years.

CHARGE FORWARD: The initial three wells drilled by OIL at the block between 2006-2013, including Lassa-1, carried a price tag of $97.5 million. As a part of phase one under the new agreement, the first well will cost $37 million, while operations for the second well will cost around $40 million. The budget mainly covers the collection of seismic data and exploratory drilling. It may cost more if there are delays.

Mishra said, “Transitioning from the exploration phase of the work to the production phase requires increased investments in infrastructure and equipment, which includes the possibility of building a pipeline that will span 250 kilometres across our field.” Efficient management of logistics will be a key component in ensuring the timely development of the block. Lorries carrying equipment from Port-Gentil to the Shakthi block are not guaranteed to arrive on schedule. In cases of an emergency, travel to reach the site takes a minimum of four days. Another concern is the procurement of work permits, limiting the companies’ ability to hire foreign personnel with specialised skills.