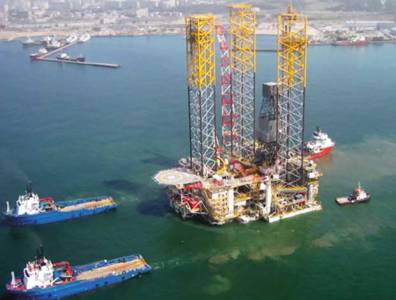 In order to match these new capacities, the existing SCP is being augmented by SCPX, a 487-kilometre, 48-inch pipeline running alongside the SCP that will raise the pipeline’s total capacity to 24 bcm per year.

Crucially, the development of Shah Deniz is an opportunity to strengthen local industry and incorporate larger parts of national production into global energy networks.

The target for Shah Deniz phase two production start is 2018

Sangachal Terminal will add an additional annual capacity of 16 bcm

On to the next phase: Azerbaijan’s Shah Deniz development

The end of 2013 marked a new beginning for the Shah Deniz field as the BP-led consortium overseeing its development announced its final investment decision, clearing the way for a new phase of construction. As planned, the project will increase production and integrate Shah Deniz with the broader European energy market.

Since 2006, the Shah Deniz field has been producing 9 bcm per year of gas for markets in Turkey and Georgia. Phase two of its development will link production to a transregional series of pipelines including the South Caucasus Pipeline (SCP), Trans-Anatolian (TANAP), and Trans-Adriatic (TAP). The first gas will be extracted by 2018 and, by 2020, oil and gas from Azeri fields will be able to travel along the Southern Gas Corridor (SGC), crossing Turkey, Greece and Albania en route to Italy.

In anticipation, European companies have already begun signing contracts. In September 2013, the French firm GDF Suez signed a 25-year contract with the Shah Deniz consortium, assuring it a steady supply of 2.6 bcm of gas per year from phase two. In the same month, the German utility firm E.ON signed a 25-year contract guaranteeing its rights to 40 bcm during that time period.

REGIONAL BOON: Coupled with a rise in production, the SGC will bolster energy security for all participating countries. To accommodate higher volumes of production, TANAP’s initial annual capacity of 16 bcm in 2020 will rise to 31 bcm by 2026. As Turkey will claim 6 bcm per year of this production, transportation of the remaining 10 bcm per year will be handled by TAP, which plans to double its capacity after beginning operations in 2020.

In order to match these new capacities, the existing SCP is being augmented by SCPX, a 487-kilometre, 48-inch pipeline running alongside the SCP that will raise the pipeline’s total capacity to 24 bcm per year. Much of the infrastructure for the projects, such as roads and compressor stations, has been subcontracted to a joint venture formed between US construction and engineering firm Bechtel International and Turkish construction company ENKA for $528 million.

The US engineering company CB&I signed a $174-million contact to provide engineering and project management services for the pipeline and its related facilities. When the pipeline is complete in 2018, combined with the 1,967-kilometre TANAP and 870-kilometre TAP, the consortium anticipates a total investment of $45 billion.

NEW OWNERSHIP: The development of the SGC has accelerated since the Shah Deniz consortium chose TAP over the proposed Nabucco West pipeline. The Turkish energy firm BOTAŞ purchased an additional 10-percent stake in TANAP from SOCAR in May 2014, bringing its total to 30 percent and making it TANAP’s second-largest shareholder after SOCAR. Pending finalisation in 2015, SOCAR will sell 12-percent ownership to BP, reducing its total share to 58 percent.

SOCAR has no plans to reduce its stake to less than 51 percent, as it wants to maintain overall control of the project.

In a similar fashion, Turkish Petroleum Corporation – increased its involvement in SGC, buying Total’s 10-percent share in SCP and the Shah Deniz field for $1.45 billion in June 2014. Despite selling a portion of its shares, SOCAR remains a significant player in the project, retaining a 16.7-percent stake in Shah Deniz itself and 20 percent of TAP.

WHO GETS WHAT: Of the $45-billion funding announced in the December 2014 final investment decision, $28 billion will go to the SCPX and the development of Shah Deniz phase two, which includes two new offshore drilling platforms, 26 wells, 500 kilometres of subsea pipe and the construction of two semi-submersible rigs.

These goals require engineering feats never attempted in the Caspian – in particular, the use of subsea technologies. Since the investment announcement, several major contracts have been made with firms specialising in such technologies. US construction firm KBR won a contract to provide engineering and procurement services.

AZERIS ON THE JOB: Crucially, the development of Shah Deniz is an opportunity to strengthen local industry and incorporate larger parts of national production into global energy networks. The production-sharing agreement for Shah Deniz, which has been extended through 2048, stipulates that Azeri nationals must make up 70 percent of non-professional workers and between 30 percent and 50 percent of professionals on the project.

These figures are set to rise sharply, with employment goals of 95-percent non-professional and 90-percent professional workers after the first five years of production.

There has been an effort to include local companies as well, including alliances between local firms and multinationals. AMEC Tekfen Azfen won a $974-million contract to provide the topsides for the new platforms. Azfen, in partnership with the Italian firm Saipem, also secured a $735-million contract for work on the SCPX. Between January 2015 and late 2017, the joint venture will add looping, block valves, a pigging facility and associated tie-ins to the 428-kilometre Azerbaijan line and another 59-kilometre loop in Georgia. Caspian Sea Oil Fleet and Caspian Marine Services will supply the majority of offshore operations vessels.

Baku Shipyard secured a $376-million contract to build the field’s flagship subsea construction vessel. The firm, established by SOCAR and Keppel O&M in 2013, will supply a vessel equipped with a 750-tonne crane, capable of installing associated offshore field infrastructure.

The Shah Deniz project will provide not only jobs for Azeris and business for local firms, but workforce education as well. In the case of Bos Shelf, whose consortium also won major contracts, the Shah Deniz project has spurred plans to open a training centre. Working in conjunction with the University of Holland, the firm’s new facility will be capable of training up to 3,000 new workers per year. The program will teach crucial skills such as welding, fitting and rigging.

TAP IN: Beyond Shah Deniz, the Absheron, Umid-Babek and Shafag-Asiman fields all contain significant proven reserves, which will be sent westward via the Sangachal terminal, whose current expansion will add 16 bcm to its yearly processing capacity. The expansion project, which is being carried out by Azeri-Turkish joint venture Tekfen Azfen, involves the construction of two new gas-processing trains and additional condensate processing facilities.

Once the new pipelines have been established, other countries in the region – such as Iran, Turkmenistan and Cyprus – have potential for network inclusion. Talks are currently underway to build an Ionian-Adriatic Pipeline to link Croatia, Montenegro, and Bosnia and Herzegovina to TAP. In July 2014, TAP and Interconnector Greece-Bulgaria announced they would integrate TAP into the Bulgarian gas network and pass onward to southeastern Europe.