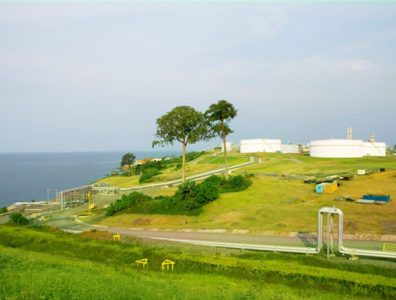 and gas reserves of14 bcm

The Jade platform’s contribution to Zafiro output is 70,000 bopd

In an exclusive from the book Equatorial Guinea: A History of Oil, produced for the MMIE in partnership with Centurion Law Firm we look at Zafiro field northwest of Bioko Island. The offshore field has not only increased the country’s hydrocarbons production but also spurred new technology. The Zafiro Producer floating production, storage and offloading vessel (FPSO) and the Jade platform have both contributed to the development of Zafiro’s assets.

By August 1996, production had reached 40,000 barrels per of oil day (bopd) and surpassed 190,000 bopd in several years. This was a significant hydrocarbons production increase on the 5,000-7,000 barrels per day of natural gas liquids produced from the Alba field since the early 1990s.

FPSO CONSTRUCTION: To produce Zafiro crude, a 270,000-dead-weight-tonne very large crude carrier was converted to an FPSO. The unit was 331.5 metres long, 56 metres wide and 26.4 metres deep. The vessel had an initial storage capacity of 1.4 million barrels, making it the second-largest production vessel at the time.

Once it was moored and connected to the eight offshore wells on the Zafiro field, the unit was able to clean water, gas and paraffin out of the oil as it was pumped, store the crude and eventually offload it to auxiliary vessels. The technical aspects of the ship, later renamed the Zafiro Producer, were among the most advanced on the continent in 1996, setting the standard for ship conversion at a cost of about $70 million.

For the first five years after production began in August 1996, the Zafiro field’s facilities were expanded yearly. Late in 1999, the Zafiro Producer FPSO underwent a second conversion. The result was a multi-purpose floating production unit (FPU) with crude oil stored in the 1.8-million-barrel MT Magnolia floating, storage and offloading vessel. The new FPU separates gas from the oil and sends the oil to the MT Magnolia, where it is stored until it can be exported to tankers via a single-point mooring system.

ZAFIRO EXPANSIONS: In December 1999, a 60,000-bopd fixed platform facility named Jade was installed to process oil from the satellite reservoirs in the eastern portion of the Zafiro field. At the time, the $560-million Jade platform was the largest fixed structure of its kind in West Africa.

Within two years, production via Jade had reached 50,000 bopd. The platform separates gas from crude then exports the oil via pipeline to the Zafiro Producer FPU. Today, the Jade platform contributes about 70,000 bopd to production from the Zafiro field.

In 2002, the $700-million Southern Expansion Area Project was introduced to expand daily crude oil recovery to more than 300,000 barrels of oil by drilling 19 subsea wells, connecting them to an additional FPSO named Serpentina and utilising early production facilities to allow a fast turnaround.

ABOUT THE BOOK: The Equatorial Guinea Ministry of Mines, Industry and Energy’s History of Oil presents the complete picture of one of the fastest growing oil economies in the world.

Published by the Ministry of Mines, Industry and Energy, sponsored by Atlas Petroleum International and in partnership with Centurion Law Firm, it details the meteoric rise of this small Central African nation, from first commercial hydrocarbons production in 1991 to an output of 204,000 barrels of oil per day in 2013.

The book was produced to outline Equatorial Guinea’s resource development in both English and Spanish.