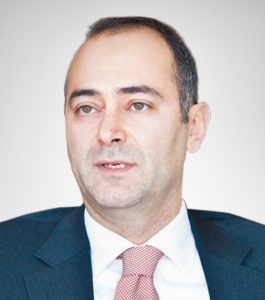 The development of the gas resources is not driven by any short-term political developments, but by Turkey’s long-term and growing energy requirements.

Amount of gas the KRI could supply Turkey:20 bcm

Oil production costs in the KRI:Less than $2 per barrel

TOGY talks to Murat Özgül, CEO of Genel Energy, about the development of the Miran and Bina Bawi gasfields, the Ministry of Natural Resources’ (MNR) statement regarding payments to international oil companies and the status of the Taq Taq and Chia Surkh licences. He expects that the company's low production cost will help it navigate the low oil price environment.

How have Genel Energy and the MNR’s plans to develop natural gas resources and accompanying infrastructure evolved since the binding intergovernmental agreement of November 2013 and the company’s agreement with the Kurdistan Regional Government (KRG) in November 2014?
Miran and Bina Bawi together form a gas resource that has the potential to transform the economy of the KRI [Kurdistan Region of Iraq] and reduce Turkey’s energy costs. There is a clear wish from both the KRG and Turkish government for their development.
The project is underpinned by the KRI-Turkey Gas Sales Agreement. Having a buyer in place for the gas is one of the things that makes this development stand out.
We are now working with the KRG to put all the required elements in place for the development to proceed. We have signed a detailed term sheet to amend the production-sharing contracts, which will develop and replace the original agreement between Genel and the KRG, aligning the KRI-Turkey Gas Sales Agreement with the midstream and upstream. It is a world-class project, and aligning all parts of the development will now allow us to make progress on obtaining financing and bringing in equity partners.

What are Genel Energy’s goals and targets for 2016 and beyond?
For Genel, 2016 activity will focus on delivering the upstream gas development plan and carrying out geological and geophysical studies. Work will also commence on the front-end engineering design and financing plans for midstream gas processing.
Such is Turkey’s demand for gas, that to an extent the development of the KRI’s gas reserves will be driven by the clear political will in Ankara. Accordingly, the development is now progressing on the ground, and BOTAS has begun its tendering process for the construction of the Turkish stretch of the pipeline. As can be seen by the speed and efficiency of the construction of oil pipelines, the KRG is well placed to proceed with the pipeline construction concurrently.
With a committed government buyer in place, we are confident of making progress and obtaining financing, allowing a FID [final investment decision] around the end of 2016 and first gas within three years of that decision.

What role do you foresee the company playing in the Kurdistan Region?
Genel has played a central role in the development of the KRI’s oil industry since 2002. Our oil production – we were one of the largest producers in the KRI in 2015 through our partnerships in Taq Taq and Tawke – forms a significant volume of oil exports. Now that the KRG’s statement on February 1 has given clarity regarding the timing and quantum of payments, we can continue to invest in line with our field development plans.
Looking further ahead, gas development has the clear potential to transform the Kurdistan Region. Economically, it will be a game changer, and it will also elevate the KRI on the international energy stage, as the region will become a strategic hub providing gas to Turkey and potentially also Europe.
While proceeding with these internationally important developments, we will continue to focus on local communities. We play an active role, helping to support and sustain the communities in which we operate and work as a partner for all people in the KRI. It is a tough time economically, and we are keen to support the local community.

Has the recent spat between Turkey and Russia prompted greater involvement by Turkish companies in the gas project?
The development of the gas resources is not driven by any short-term political developments, but by Turkey’s long-term and growing energy requirements. All countries are keen to have a diversified energy supply, and are even keener to reduce their costs.
Russian gas currently provides more than 50% of the gas that Turkey consumes. In fulfilling around one-third of Turkey’s usage through the supply of up to 20 bcm (706 bcf) per year of gas, the KRI can provide diversification at a cost that no other gas producer can come close to matching.

Does the KRG’s dire financial situation have the potential to affect the gas project directly?
The situation is undoubtedly tough but, through the economic benefits it will provide, the gas project is one way in which this situation can be changed for the better on a long-term basis. As mentioned, it is a unique project that has a customer ready, and a gas sales agreement is in place.
The project has the potential to provide a healthy margin for each component of the value chain, even at a low oil price, and so all parties are keen to see it progress. Recent payments to the IOCs by the KRG have reinforced their support for the industry and its importance in strengthening the regional economy.

What work has the company carried out in its other licences in the past two years?
Taq Taq oil production rose to record levels in 2015, although the lack of clarity in the receipt of payments caused us to make the prudent decision of minimising investment, which led to a decline in production in the second half of the year. Now that we have certainty in payments for oil exports, investment is resuming at Taq Taq.
Chia Surkh is currently at an appraisal stage as we prepare for an appraisal well in the first half of this year. The CS-12 appraisal well, for which we are carried by our partner Petoil, will help refine the contingent resource estimate for the Chia Surkh licence.

Genel is known in the industry for its very low production expenses. Is this how the company has been navigating the current low oil price climate?
Genel is a very resilient business at a time of a sustained low in the oil price. At less than USD 2 per barrel, our production costs in the KRI are amongst the lowest globally, and we have significant flexibility in our capital expenditure. This allows our spending to be appropriate to the external environment, retaining our balance sheet strength and leaving us well placed to move our key assets forwards.
By matching spending to our receipts and outlook, we are able to navigate a robust path through the tough external environment. As well as keeping a tight rein on our operating costs, we have focused on our core assets across the portfolio and significantly cut our capital expenditure. None-core assets have been relinquished, and our African exploration programme greatly scaled back.
We now have the right-sized portfolio for the current environment, with cash generative production, a game-changing gas development project and an appropriate level of high-impact, cost-effective exploration and appraisal opportunities.

To what extent have the MNR payments for oil exports changed the outlook for Genel Energy and the KRI market as a whole for 2016?
The statement made by the MNR in August last year, and the resulting payments for exports, provided increased confidence in the KRG’s ability to match its willingness with its ability to make oil exports.
This commitment to fully remunerating IOCs was set in stone on February 1, 2016, when the MNR issued a statement confirming that monthly payments will be based on the contractual entitlements under the production-sharing contracts governing each licence.
The statement also illustrated the mechanism through which Genel’s receivable will be paid off, as each month a percentage of the monthly netback revenue will be used to reduce the outstanding amount.
Although symbolic in amount (5%), the additional payment for the past receivable is of great significance, as it clearly demonstrates its recognition by the KRG. And as oil price rises, this percentage will increase.

How have you seen the operating environment evolve over the past 18 months?
At a time of such a prolonged drop in the oil price, it is easy for people in the industry to focus on negatives and ignore positive developments. It is worth standing back and seeing the tremendous progress made over the past 18 months.
Production has increased significantly, and more than 600,000 bopd now exported by pipeline to Ceyhan. The sale of KRI crude to the international market is regular and predictable. The days of people wondering whether the KRG would be able to find buyers are long gone.
As mentioned a number of times already, there is also now clarity and predictability about payments to companies for oil exported. Finally, after being instrumental in the development of the KRI’s oil industry, we are proud to now play a pioneering role in developing the KRI’s transformational gas industry, which will be a real game changer in this part of the world.