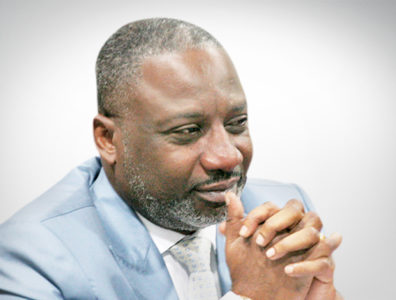 Because of the current troubles the nation is facing as a result of the low oil prices, it is important for the country to diversify its revenue sources. The digital economy is a flourishing sector which will greatly benefit the country. Between 2014-2015, we’ve seen a growth of 5% of the country’s GDP. Mobile operators contribute a lot to this economic growth.

Could you provide us with some detailed information on the Gabonese National Backbone-project (GNB)?
First of all, we connected the country to the ACE [Africa Coast to Europe] cable. ACE connects Gabon to other countries and multiplies its international capacity by eight. The project was then divided into four phases. The first phase, Libreville-Port-Gentil, was completed in 2012 via a 200-kilometre underwater cable and was done in partnership with Total Gabon. Right now, we are in the second phase, which aims to link Libreville to Lekono, crossing the country’s surface from west to east with 1,100 kilometres of cables. This is being done with the financial support of the World Bank and will be finished by June 2016, after which we will begin the two other phases of the project.

Why is this GNB-project so important for the development of the country?
Previously, when a telecom-operator invested in infrastructure, he owned that infrastructure, and he developed it. That prevented other operators from having access to that service, which was often very expensive. That’s why the Gabonese government decided to create shared infrastructure. Fibre optics make it possible for operators to offer 3G and 4G services to their clients, high bandwidth and high speeds. Oil companies have computer systems that are voracious in terms of bandwidth. Fibre optics will allow them to transmit data. It’s also a more secure system: It doesn’t matter whether it rains or snows, because the cable is buried or under the water. For example, before the underwater cable between Libreville and Port-Gentil was created, both cities communicated with each other through satellites or digital microwave links. Oil companies benefit from these cables as they now have international capacity to access their data and can have high-speed connections.

What impact will the GNB-project have on oil companies working offshore?
Companies working offshore will be able to access things like 4G, because it is high-speed technology and the broadband is transmitted through fibre optics. That means that we’ll subscribe them to a wireless connection, but then we must tap into the backbone and connect to the underwater cable. I think that both onshore and offshore oil companies will be able to benefit from this infrastructure, but not through the government. Private telephone operators will be able to expand their commercial offers by developing those products.

What must private telephone operators do to allow both offshore platforms and remote onshore sites to benefit from 3G and 4G?
ANINF is only constructing the shared infrastructure that is truly the heart of the network. Afterwards, the private telecommunications companies must take care of the last mile. They will have to reach offshore platforms through BTS [base transceiver stations]. But none of that would be possible without a POP, or point of presence. That’s a point where we can cluster all the traffic that comes from platforms. Through this backbone we transmit to Libreville and from there it goes to Europe or America.

How can fibre optics contribute to the growth of the country’s GDP?
Because of the current troubles the nation is facing as a result of the low oil prices, it is important for the country to diversify its revenue sources. The digital economy is a flourishing sector which will greatly benefit the country. Between 2014-2015, we’ve seen a growth of 5% of the country’s GDP. Mobile operators contribute a lot to this economic growth. The penetration rate of mobile telephones in Gabon is 193%. Every Gabonese citizen has on average four mobile phones. There are four mobile telephone operators, which contributes a lot to that. We’re also trying to develop application infrastructure. Creating new applications will provide new services, like e-money, Airtel money and mobile banking. All of this is possible because of the high-speed telecommunications infrastructure.