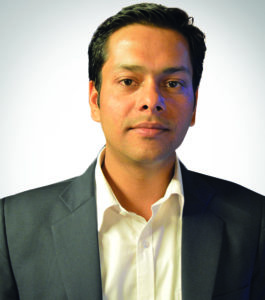 "As India faces severe challenges in the area of global warming, switching to LNG will definitely support clean environment programmes that the government is running."

Forecasted time it will take for LNG supply to triple in India:10 years

The slow rise of LNG

Mayank Garg, CEO of VLNG, talks to TOGY about the future of LNG in India, challenges facing the sector and the importance of building related infrastructure, such as the government’s Sagar Mala initiative. VLNG is developing a small scale LNG supply chain along India’s waterways and coastline to meet growing demand.

Could you give us an overview of your company’s operations?VLNG started in 2015 with the concept of building small-scale LNG terminals and storage in India. We are currently working on the Sahaj Ganga project, with plans to build small LNG storages and bunkers across National Waterway 1 of the Ganges River. We have partnered with global leaders who have expertise in small LNG terminal construction and operations to bring the best solutions to India.
Traditionally in India, large terminals, such as Hazira, Kochi, Dahej and Dabhol, were built on the western coast of India, and the model was adopted to have few anchor customers, regasify the LNG and push it to customers through pipeline network, but this model faces challenges for new projects with regard to timely completion of pipeline network and in locating big anchor customers with large enough volume to support the project. In view of this, we have adopted a very flexible and modular approach to LNG storage terminal and distribution.

What are the advantages of using LNG as a fuel?
The demand that we are targeting is the displacement of all liquid fuels, be it diesel, heavy fuel oil, LNG or naphtha. All of these fuels are heavy in terms of carbon dioxide emissions and particulate emissions. One of the advantages of switching from these fuels to LNG is the reduction of environmental footprint.
As India faces severe challenges in the area of global warming, switching to LNG will definitely support clean environment programmes that the government is running. Also, given the current market outlook, LNG is more economically competitive.

What is your forecast for global LNG prices?
We foresee that the market is going to be heavily oversupplied for at least the next decade because we have a huge supply coming from Australia on top of the volume from the USA. At the same time, the demand that the market was expecting from China and India is not coming. There has been no growth in the demand for LNG, while the supply is going triple from what it is now over the next 10 years. Given the oversupply, we expect the prices to remain at this depressed level for the next decade.

Can you assess the competitive landscape in India’s LNG market?
We have to see what demand we are talking about when we talk about LNG in India. If you are talking about power generation, it is difficult because you have to compete with more competitive fuels such as coal. In India right now, with the good governance shown by the current government and the prime minister, coal production has increased significantly. We do not see much demand for LNG coming from the power generation sector. Fertilisers are the same.
The demand we are targeting is more towards industrial demand for gas and the transportation sector, whether it is for inland waterways, railways or long-haul trucking. The current shipping and transportation minister, Nitin Gadkari, announced that India should increase the usage of LNG as a fuel for inland waterways, and we expect significant demand for LNG as a bunker fuel for river barges and also from large sea going vessels. Indian railways are also planning on using LNG as fuel.

How can India’s energy sector capitalise on the government’s Sagar Mala initiative?
Right now, India is starting with these coastal shipments and a lot of vessels are expected to come. I think it is a good time for India to take a leap forward and set an example for the world by adopting clean fuel such as LNG for the shipping sector. Rather than being pushed by the International Maritime Organisation, I think India has the opportunity to really jump that step forward and take a proactive stance on clean fuel for all vessels, including those newly built under the Sagar Mala project.
Still, what is really required is the augmentation of LNG infrastructure, since diesel and heavy fuel oil is readily available on the market.

How does your business model bring innovation to India’s LNG market?
Large LNG terminals require huge capital, around USD 1 billion to build a storage and regasification facility. Given the uncertainty in demand growth, there has been lot of hesitation in setting up large storage facilities. Even though a lot of terminals have been planned on the eastern coast and are due for construction and execution, it is still questionable because you need to get this anchor demand, and that is not there yet.
The way we have approached this business is to break it down and make it modular. We want to start small and limit the risk of our investors and incrementally add capacity. This modular approach is something unique that we are doing. VLNG wants to see LNG flowing along the Ganges River and similar projects at other locations on the eastern and western coast of India, as well as other locations in the India sub-continent in the future.

The government has been enabling a positive entrepreneurial environment in the country. Are there any specific projects to promote energy start-ups?
VLNG takes advantage of all the benefits and opportunities that come. Being a start-up, we face many challenges. Dharmendra Pradhan, India’s petroleum minister, announced in March 2016 at the Natural Gas Conference 2015 that he would like to promote start-ups in the energy industry and asked the entire oil industry’s public sector undertakings to start a special fund that these start-ups can use. We look forward to that.

What can the current government do to ensure stable LNG imports under favourable prices?
India has a very commanding position in the LNG market. This is an oversupplied buyer’s market with one of the largest growth potentials. What is required is a common platform where all companies can come together and source LNG, rather than fighting against each other. That would be a good approach. I think that sellers would have to respond.
The traditional model of selling in India, which is oil index, needs to be more flexible because if you are looking to capture big demand in India, it is going to come from the power generation sector. With the power generation sector being a regulated sector in India, you need to have visibility on the cost of fuel over the next 15 years.
You cannot have a fuel that is indexed to global commodities. LNG will have to start being a commodity by itself. I think India right now is in the right position to ask for this, but it is only possible if all the buyers in India come together.

How do you see India’s LNG market evolving?
The LNG sector has huge potential in meeting the growing energy demand of India. We see that large LNG marketers and suppliers present in the country will serve the large demand from power, fertilisers and refineries through large LNG terminals connected with gas pipeline networks, along with companies like us like us approaching it in a flexible and modular way, targeting small-volume demand from the non-traditional sectors. We will do this because it is a model of aggregation of demand, which requires lot of efforts with marketing, educating customers and operations.