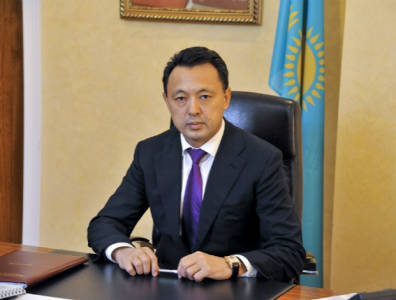 Kazakhstan saw an upward trend in hydrocarbons production during the first eight months of 2014.

Anticipated combined yearly production from the Tengiz, Karachaganak and Kashagan fields by 2022283 million barrels of oil

Estimated yearly gas production from those fields in 202261.7 bcm

Sauat Mynbayev, chairman of national oil and gas company KazMunayGas (KMG), talks to TOGY about the company’s plans – both domestic and global – and its coming transformation under Kazakhstan’s new programme for improving corporate governance. KMG is heavily involved in the exploration, production, refining and transportation of the country’s hydrocarbons.

The expectations of the country’s oil and gas industry centre on its three major fields: Tengiz, Karachaganak and Kashagan. What are the prospects for these operations?

The development plans of these three projects have a direct influence on the long-term macroeconomic indicators of Kazakhstan.

Due to KMG’s recommended expansion projects, annual oil production from these fields is expected to increase to around 283 million barrels by 2022, with KMG’s share of this totalling an approximate 56.5 million barrels.

An expansion project for the onshore Karachaganak operation is being considered. This would envision an annual stable production of more than 73 million barrels of liquid hydrocarbons when the Karachaganak field is further developed and expanded as planned.

Furthermore, total natural gas production from these fields by 2022 is likely to increase to 61.7 bcm (2.18 tcf) per year. This uptick would mainly be due to more drilling activities in Karachaganak and the resumption of production in the offshore Kashagan field.

Could you outline KMG’s development goals?

KMG’s main objectives are to maximise our shareholders’ value by increasing our assets’ worth in the long term and to contribute to the modernisation and diversification of the economy of Kazakhstan. Our central tasks are to increase the scope and success of exploration activities with the purpose of incrementally growing our reserves, increasing oil and gas production, improving the transportation of hydrocarbons, modernising refineries, upgrading the quality of petroleum products and ensuring greater access to them in the domestic market.

Furthermore, KMG aims to develop the oilfield services sector and increase its levels of innovation and technology, as well as establishing an effective and transparent system of assets management in the sector. KMG’s Development Strategy involves plans to increase the production of oil and gas until 2022.

Will KMG expand its activities abroad?

Kazakhstan produces around 601.33 million barrels of oil equivalent (boe) of oil and gas condensate yearly. More than 80 percent of its hydrocarbons are exported. The country’s oil exports could grow substantially once production restarts in the super-giant Kashagan oilfield, as is anticipated for early 2016.

Kazakhstan is developing two major export routes to China and Europe, a necessary move for balanced growth. Due to this, we are considering development possibilities for our international division in the areas of refining and marketing.

Recently, Samruk-Kazyna, the sovereign wealth fund, announced a programme to modernise and transform corporate governance. Has KMG created a plan for this transition?

In 2012, President Nursultan Nazarbayev set a goal of seeing Kazakhstan become one of the 30 most developed countries in the world by 2050. With this objective, Samruk-Kazyna began working on transforming the KMG group of companies.

The aim of the modernisation and transformation programme is to implement the best practices, technologies and standards in the company’s management. KMG is constantly working to improve its corporate leadership.

In particular, a divisional management structure is to be implemented, allowing the transition to a centralised management based on common standards, unified business procedures and shared tools to help the flow of information from the bottom up.

What levels of hydrocarbons production did KMG see in 2013 and 2014?

Almost all of our indicators, including the exploration of oil and gas, illustrate positive tendencies in 2013 and the first half of 2014.

KMG’s share of the country’s oil and gas production reached 27.7 percent in 2013. Kazakhstan saw an upward trend in hydrocarbons production during the first eight months of 2014.

The volume of oil and gas condensate output reached 109.48 million boe, a 1-percent increase when compared to the same period in 2013. Comparing the same two periods, production of gas also rose by 5 percent in 2014.