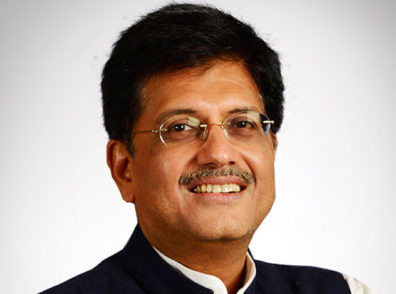 India will adopt new technologies to streamline greater energy efficiency and emission compliance. We are also looking at investment in smarter grids. The entire grid management in India is going to see a change with the ability for seamless flow of power across the country, anytime, anywhere.

TOGY talks to Piyush Goyal, minister of state with independent charge for power, coal, new and renewable energy and mines, talks to TOGY about India’s increasing energy demand, goals placed by the government to update infrastructure and the drive to provide standard services all throughout the country.

What have been the main changes in India’s power generation sector?
The most significant change is that India, which usually worked in an era of shortages, has now reached a situation where the country is working with surpluses. In this era, the advantage is that we can assure people with an adequate uninterrupted supply of electricity at all times of the day at affordable prices. With this trust, we want to keep sustainability as the cornerstone of our drive to give access to constant affordable energy to every individual in this country. This is why our focus is in on bettering transmission and distribution to end-users. There is a growing trust in renewables and clean energy, as well as a push towards making sure that coal will be used more efficiently. Due to these factors, the states’ Power for All scheme no longer seems like a distant dream, but an achievable reality.

Where do you see the biggest opportunities for international companies to come and invest in India?
There’s huge opportunity in almost every aspect of the energy value chain. We have a trillion dollar opportunity across the power value chain. India is a country in the world whose energy demand continues to rise. India will quadruple its energy need in the next 15 to 17 years. Every other developed country will fall in terms of energy efficiency and technology. This provides opportunity in the next 15 years in adding coal-based thermal power plants, ultra mega power projects, supercritical and ultra-supercritical plants, and replacing plants that are more than 25-30 years old. We have many inefficient mature plants that will need to be replaced with new plants. Coal will continue to be the bedrock of our power sector. However, we want to clean up coal and use modern technologies for washing, crushing and cleaning coal so that pollution, even while transporting the energy source, is kept to the bare minimum. India will adopt new technologies to streamline greater energy efficiency and emission compliance. We are also looking at investment in smarter grids. The entire grid management in India is going to see a change with the ability for seamless flow of power across the country, anytime, anywhere. The focus is on removing congestions and stabilisation of the grid. This is also part of a larger move towards the government’s One Nation, One Grid, One Price mission. Additionally, we have a target of setting up 175 GW of renewable energy capacity by 2022. The bulk of this generating capacity will be coming from solar, wind and hydropower. This will entail investments in green energy corridors for better transmission. All these developments have to ultimately make power affordable, accessible and reliable. The ultimate goal is having around-the- clock, affordable and environmentally-friendly power for everyone.

What are some opportunities in the up-and- coming renewables sector?
The government’s ambitious target of 175 GW of installed capacity of renewable energy by 2022, which I mentioned before, includes 100 GW of solar, 60 GW from wind, 10 GW from biomass and 5 GW from small hydroelectric projects. Because the current renewable installed capacity is 44 GW, investment opportunities are huge. Very early on, we recognised the potential in the renewables sector. Our thrust also led to the largest ever increase in solar capacity in the two-year period of 2014-2016 of 4.13 GW. Similarly, we achieved the highest ever increase in wind capacity of 3.42 GW between 2015 and 2016. We are continuing to expand with solar projects of around 20.9 GW tendered in financial year 2015/16. There are also green energy corridors to facilitate transmission of renewable energy. Given the sheer scale we are working towards, these are golden opportunities for foreign investors.

What can be done to improve the access to electricity in the eastern regions of India?
The largest electrification gap is in East India, which includes Bihar, Odisha and Chhattisgarh. We are very concerned, as these areas have not really benefited from the development process of the country for the past seven decades. We view the development of these areas as critical for achieving economic growth and prosperity across India. As we increase the national average consumption per capita from the current 1,000 kWh to 4,000 kWh in the next 15 years, our objective is to include the eastern states where the consumption is less than the national average, as well as significantly increasing the electrification ratio to national levels. Prime Minister Narendra Modi is very committed to bringing these areas to standards set in the West and Southern India so that all of India benefits equally from development and growth. In this regard, all the money made in the coal block auctions is 100% being given back to these states. The central government is not keeping any of it. The idea is to distribute more funds to better the lives of the people, particularly in weaker and underdeveloped states, so that their people can see a better future for their children and their families.
Our scheme for rural electrification is the Deen Dayal Upadhyaya Gram Jyoti Yojana. One of the objectives is to electrify the remaining 18,452 villages within 1,000 days of April 1, 2015. There is also work on intensive electrification under the programme, such as connecting all households. We are also working on strengthening the power infrastructure in the urban areas through the Integrated Power Development Scheme. Another flagship initiative is the Ujwal Discom Assurance Yojana, aiming to provide a sustainable financial overhaul to the country’s indebted power distribution companies or DISCOMs. In our power value chain, the DISCOMs are the weakest link. The initiative’s objective is to improve operational efficiencies, reduce cost of power by 2019 and enforce financial discipline. Additionally, the effort to create new transmission and electric distribution infrastructure in those areas is receiving our utmost attention. All these initiatives are expected to improve the power scenario in the Eastern part of the country.