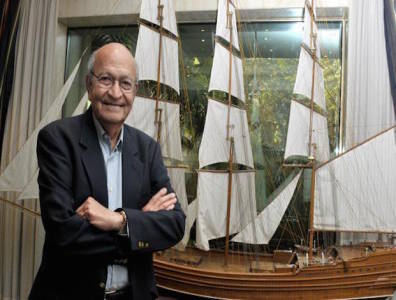 Even with the rupee exchange rate being favourable for foreigners, delays in vessel delivery in the middle of a recession will cause an order to be cancelled.

Month both Hyundai Shipyard in Korea and Cochin Shipyard in India were set up: March 1972

What role does the government play in the Indian shipping industry?

The government always plays a very important role in promoting the growth of the Indian shipping industry. While doing this, whenever the minister and/or bureaucrats in high positions change, the industry association has to maintain constant contact with the newcomers and educate them as to how to promote growth of the industry.

After a couple of years, the government was convinced and agreed to introduce a tonnage tax, a fixed rate that depends upon the type and size of the ship, regardless of whether it makes profit or loss in its operation, in April 2004.

This development greatly encouraged Indian ship owners, and they started acquiring ships in a big way. Unfortunately, government slowly started to add different taxes onto the industry, which gradually made the companies less competitive.

Many maritime nations do not tax the shipping industry, so as to make the companies globally competitive. The prime example is Singapore. It is a very small country but has registered more tonnage under its flag than has been registered under the Indian flag.

Does the domestic shipping industry have sufficient access to financing?

Domestic tonnage has decreased, which has increased financial constraints, and several companies have gone bankrupt. Shipping in India cannot expand unless the government takes a major decision. Finance has become a big problem for the industry as banks are becoming quite strict and conservative in their loan policy.

What are some regulatory challenges facing Indian shipbuilding?

The shipbuilding industry in India differs a bit from shipping, as there is adequate capacity in nearly all of the country’s shipbuilding yards. The industry has five main problems: inadequate shipbuilding experience and a strike-friendly labour policy as well as lack of power supply, efficiency and hard work.

For these reasons, no shipyards in India are doing well. Even with the rupee exchange rate being favourable for foreigners, delays in vessel delivery in the middle of a recession will cause an order to be cancelled.

What policy changes could create a more business-friendly environment in both shipbuilding and shipping?

Out of all the reforms that the government could implement to alleviate these conditions, labour reform on working hours, wages and other benefits is key. In most countries around the world, when labourers go on strike, management meets with the union leader to begin negotiations, and there is no pay during a strike.

The first demand in India is always to pay wages for duration of the strike period. Other unions around the world understand the principle of “no work, no pay.” In India, little change can be made to labour conditions as there are no further talks unless one party agrees to pay wages during the strike.

The new government’s economic reforms are making waves. Even though domestic production is not keeping pace with consumption, low oil prices are an attractive development for India and a golden opportunity to grow faster economically.

Unfortunately, this has happened at a time when storage capacity is down, which can be increased in time. Oil prices will not remain like this indefinitely.Tankers should be chartered, filled with oil and kept as floating warehouses to take advantage of low oil prices in India.

Click here for more news and features from India