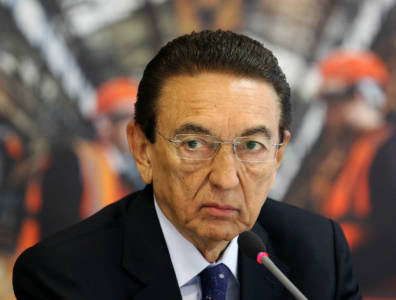 The increases in petrol prices in the internal market will have an impact on the Brazilian population’s purchasing power.

Contribution of natural gas to Brazil’s energy mix in 201211.5 percent

Brazil’s energy industry is undergoing a transformation as it strives to boost its ethanol market and manage its pre-salt reserves. Droughts have had a detrimental affect on renewable energy production, meaning natural gas may become a critical part of Brazil’s energy makeup. Brazil’s Minister of Mines and Energy Edison Lobão describes the infrastructure changes in the nation and the thinking behind them.

What are the main issues facing the development of Brazil’s oil and gas industry?

The recent pre-salt discoveries, with estimated recoverable volumes of up to 42 billion barrels of oil, pose substantial challenges. State-run oil company Petrobras, which operates in pre-salt areas, has played a strong role in maintaining the fields already in production. The company has also increased its efforts to develop new fields. From 2014 onwards, it is expected that Petrobras’ production will cause a surge in Brazil’s oil and gas industry.

In the oil derivatives market, catching up with the growth in demand is the biggest challenge. Four new refineries are expected to come online in the next few years. These are Comperj, Premium 1 and 2 and Abreu e Lima. Together, they will add about 1.46 million barrels of oil per day (bopd) to Brazil’s current processing capacity.

When it comes to natural gas, the aim is to increase the availability of the resource in the country. The Ministry of Mines and Energy has been working on various initiatives to promote the development of the sector, such as the launch of three bidding rounds for exploration blocks in 2013. The 12th bidding round in November 2013 prioritised areas with potential for onshore conventional and unconventional natural gas production. Studies were also launched on how to use the associated natural gas that can be found in carbon mines, commonly known as coal bed methane or coal seam gas. The ministry also concentrates on the development of a policy to restrict the flaring of natural gas and the 10-year Plan for Expansion of Gas Pipelines (PEMAT).

When it comes to refining, Brazil is making a considerable effort to be self-sufficient and eventually become an exporter. With the four new refineries and new pipelines under way, we will be able to keep up with demand. New legal requirements were established to guarantee that distributors stock larger volumes of fuel in order to relieve the flux of fuel availability to consumers.

The Programme for Modernisation and Expansion of the Fleet aims to expand Brazil’s current fleet for transporting oil and oil derivatives with the construction of 49 vessels having a total capacity of about 4 million tonnes. Investments are planned to exceed $5 billion. In 2013, the first four ships were delivered and in 2014 six more ships will become operational.

The majority of the gas pipeline grid in Brazil is in the coastal areas of the country since most of Brazil’s natural gas is produced offshore. The potential for the expansion of this grid to the country’s interior areas is significant. Gas prices must become comparable to the prices of alternative energy sources. In the medium term, onshore gas production, especially in the blocks auctioned in the 12th bidding round, is expected to encourage the expansion of the internal pipeline grid and contribute to the decrease in the price of natural gas in the national market.

What will be the impact of the increase in the price of petrol on Brazil’s internal consumption?

In the past few years, governmental policies have contributed to an increase in purchasing power in the country so demand for petrol is likely to increase. Depending on the adjustment of the prices, if petrol is more expensive than ethanol, consumers and owners of flex-fuel engine vehicles may prefer ethanol to petrol. Petrol has an approximate weight of 4 percent in the calculation of the nationwide consumer price index, which serves as a baseline to measure inflation in the country. This means the increases in petrol prices in the internal market will have an impact on the Brazilian population’s purchasing power. The federal government has been trying to adopt other structuring measures, which will contribute to the reduction of costs in ethanol production and promote the development of new technologies. These measures may further improve the price balance between the two sources in favour of ethanol.

What difficulties lie in gas monetisation in the Brazilian market?

Natural gas has a very important role in the country’s energy matrix but the history of natural gas in Brazil is relatively recent. In 1998, a year before the Bolivia-Brazil Gas Pipeline came online, natural gas only made up 3.7 percent of the country’s energy mix. Two years later, after the completion of the Bolivia-Brazil Gas Pipeline, the contribution of gas increased to 5.4 percent and has been growing ever since. It has reached 11.5 percent in 2012. That growth was only possible due to major investments in exploration, production, regasification terminals and infrastructure. There were also investments in gas pipelines, which are fundamental for the grid industry. In 1998, Brazil had only 2,200 kilometres of gas pipelines. Today there are 9,200 kilometres. The availability of natural gas grew to 90 mcm (3.18 bcf) per day in 2013 from 15 mcm (530 mcf) in 1998.

Producing companies basically have two options for monetising natural gas. These are local consumption or market supply transported via gas pipelines. In the latter case, according to Brazil’s Gas Law, the Ministry of Mines and Energy has the responsibility to propose, by its own initiative or at the request of third parties, which gas pipelines are to be built or expanded. The ministry works in direct collaboration with the state-run Energy Research Company to study the best options for infrastructural development, which are presented in PEMAT. The major challenge for the growth of this sector is the ability to predict and balance the demand in the market for gas with the necessary infrastructure to meet people’s needs on time, having evaluated the commercial feasibility of the project.

What kind of an impact does the exploration for these resources have in the country’s energy matrix?

The studies we developed and previewed in PEMAT indicate a potential growth in demand in non-thermoelectric electricity production, which suggests opportunities for the exploration of this resource. Following anticipated increases in electricity demand, there is also potential for thermoelectric power generation fuelled by natural gas.

According to Brazil’s National Energy Plan for 2030, natural gas could increase its share in Brazil’s energy matrix to 15.5 percent. Onshore gas production has the advantage of requiring less investment than offshore. Additionally, many of the areas obtained in the 12th bidding round are located close to mature markets, improving the speed of gas integration in national consumption. We expect the 12th bidding round to encourage an increase in natural gas offerings nationwide.