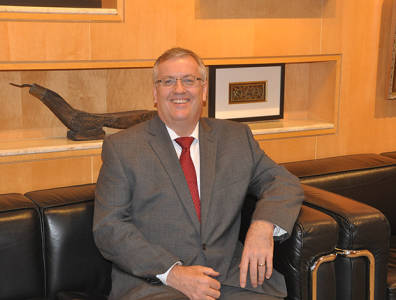 In the current market, capital-intensive projects such as new enhanced oil recovery projects and new deepwater developments will probably be scaled down or deferred.

Murphy Oil vice-president for Malaysia John James speaks to TOGW about the current dynamics in Malaysia’s exploration and production sector, including the challenges posed by deepwater development, the upstream gas market and the impact of global oil prices. US independent Murphy Oil operates Malaysia’s first deepwater project, the Kikeh field, along with seven production-sharing contracts in the country.

What are the obstacles to deepwater development in Malaysia?

Deepwater projects always face challenges, especially nowadays with the continued fall in oil prices. In the current market, capital-intensive projects such as new enhanced oil recovery projects and new deepwater developments will probably be scaled down or deferred. The biggest challenge ahead is to continue exploration and production on a restricted budget, which must include cost cutting measures.

How will the oil price slump affect Malaysia’s upstream sector?

We’ve been through this before and prices have historically rebounded. In 2009, we saw a similar drop from $150 to $40 per barrel, but it quickly improved. This time it probably won’t recover quite as quickly, but eventually it will get better.

In general, 2015 will be a challenging year, but at the end of the day this will make companies evaluate everything they do in terms of cost and priority, making them more efficient and selective.

What impact will lower oil prices have on deepwater exploration and production?

As a result of low prices, companies have to look at ways to cut costs and make their future plans economical, either through operational efficiency or through capital and operational expense reduction. This applies to everybody in the industry, not just international oil companies.

We are also seeing more consolidation in the market today. Last year, Murphy Oil sold 30 percent of its working interest in oil and gas assets in Malaysia to Indonesia’s Pertamina for $2 billion. While people may have interpreted this as a sign of our decreased investment in the country, the move was in fact intended to consolidate our assets and look at other opportunities in the region, including Malaysia.

In Sarawak we developed an infrastructure offshore, near the Malaysia LNG facilities, to provide feed gas to the Malaysia LNG plant in Bintulu. As a result of offshore gas development, there is sufficient feed gas for the continued expansion of MLNG.

Another important development that will contribute to Malaysia’s status as a key LNG exporter is two floating LNG projects. The first, PFLNG-1, was commissioned for the Kanowit gasfield off the coast of Sarawak, and will be the first floating LNG facility in operation anywhere in the world. Petronas is developing the second facility, PFLNG-2 in block H, a deepwater block offshore Sabah in which Murphy is operator and holds a 56 percent stake. Murphy will be providing Petronas with the gas that will be processed at the floating LNG facility.

By using existing infrastructure, economies of scale come into play, and this is what makes this strategy so attractive to oil companies working both onshore and offshore. Operators in Malaysia have been able to successfully bring new discoveries on stream using existing infrastructure. To illustrate this point, at the Siakap North and Petai fields, a subsea tieback allows production to flow to the Kikeh floating production, storage offshore vessel, stationed at the Kikeh deepwater field.

Previously, Murphy worked with partners to complete a two-well tieback that provided early production from the Gumusut-Kakap field to the Kikeh as part of a joint venture with Shell, US-headquartered ConocoPhillips and Petronas. Tiebacks support stranded assets and can also make use of the spare capacity at floating production systems, before full field development is achieved, and a floating production system comes on line, and this is what happened at Gumusut-Kakap.

Working on fields near your existing production is always easier. We have used this development strategy in our shallow-water projects off the coast of Sarawak at the West Patricia, on blocks SK309 and 311.

About the company: Murphy Oil entered Malaysia in 1999 to work on the West Patricia field off the coast of Sarawak. In 2007, the company began production at Malaysia’s first deepwater development, the Kikeh field. Even after the 2014 sale of 30 percent of the company’s working interest to Indonesia national oil company Pertamina, Malaysia remains one of Murphy Oil’s key markets, making up 40 percent of its net production in 2013. The company holds PSCs in seven offshore blocks in Malaysia, including blocks K, H, SK 309, SK 311 and SK 314A.