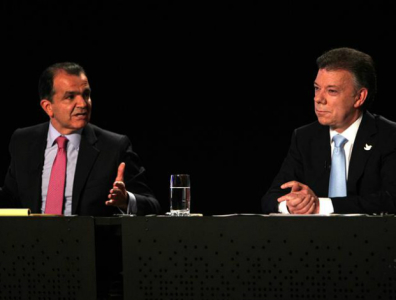 Colombian elections move to second round as Santos slips

BOGOTÁ, June 4, 2014 – Colombian president Juan Manuel Santos will face a showdown vote against his challenger Óscar Iván Zuluaga, after Zuluaga beat Santos in a surprising first round of the presidential elections on Sunday 25 May.

President Santos’ bid, marred by strikes, a resurge in guerrilla violence and political inquietude, secured 25.7 percent of the votes. Zuluaga, a protégé of popular ex-president Álvaro Uribe, beat the incumbent by more than 3 points, garnering 29.3 percent of the vote.

The two candidates will now face each other in a run-off vote on 15 June. They are currently vying for the support of the other three presidential candidates.

While Santos has retained many of the liberal oil and gas regulations of his predecessor Uribe, he has scrapped tax cuts and has made environmental rules stricter. He also reformed the royalty system, with more of the royalties flowing directly to the central government, saying this would spread the wealth more evenly. Zuluaga has criticised the new setup, saying the oil-producing regions should see the direct benefits of their resources.

Ecopetrol sells bond with longest maturity in Colombian history
Next