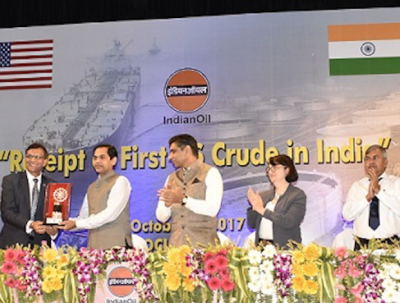 NEW DELHI, October 2, 2017 – Indian Oil Corporation has received its first shipment of 1.6 million barrels of crude from the USA, the company said on Monday.

Indian Oil became the first Indian public sector refiner to purchase US crude and has placed a cumulative order of 3.9 million barrels from the USA, according to a news release. It plans process it at its east coast refineries in Paradip, Haldia, Barauni and Bongaigaon.

“US crude oil shipments to India have the potential to boost bilateral trade by up to USD 2 billion,” the US Embassy said in a separate statement.

A total of 7.85 million barrels of US oil has been contracted to date by Indian public sector refineries including Bharat Petroleum and Hindustan Petroleum, the company statement added.