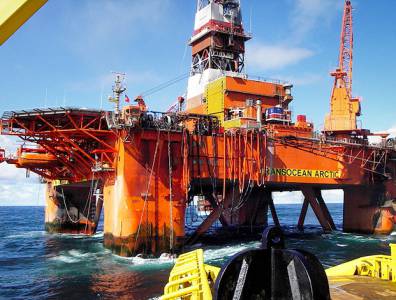 OSLO, April 28, 2015 – Germany’s largest oil and gas producer Wintershall has made a minor oil discovery at a wildcat in the Norwegian Sea. The company made the find at the 6406/2-8 well on the Isma prospect in production licence 589 but has deemed sandstone to be of “generally poor reservoir quality.”

The well, which was drilled to a total depth of 4,655 metres with the semi-submersible Transocean Arctic, encountered two oil columns over an around 130-metre interval in the Bat and Fangst groups in the target Lower and Middle Jurassic reservoir rocks. Initial estimates peg recoverable hydrocarbons at 1 mcm-8 mcm of oil equivalent.

The 6406/2-8 well is to be permanently plugged and abandoned. Transocean Arctic will move to drill the 35/12-5 S well on Wintershall-operated production licence 378 in the North Sea.

“The licences will assess the discovery with regards to further follow-up. The well was not formation tested, but extensive data acquisition and sampling have taken place,” Wintershall was reported as saying.

The Isma probe was the first to be drilled in PL 589 in the Halten terrace area, which was awarded in 2011 under Norway’s Awards in Pre-defined Areas round. Wintershall operates the licence with a 40-percent share, with Hamburg-based RWE Dea and Spain’s Repsol each assuming 30 percent.