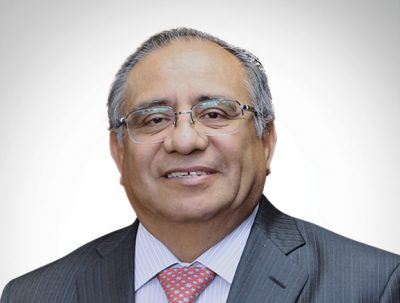 PEP aims to contain and reverse its production decline and increase profitability. We want to implement farm-outs and establish schemes for acquiring additional investment.

Juan Javier Hinojosa Puebla, CEO of Pemex Exploración y Producción (PEP), talks to TOGY about how far the company has come under the Mexican energy reform, plans to address challenges such as budget restrictions and production declines, and the outlook for E&P farm-outs and partnerships. PEP first entered into upstream partnerships in December 2016, with Chevron and Inpex at Perdido Fold Belt Area 3 and with BHP Billiton in the Trion field.

On company goals: “We would like to first establish an exploration model that permits reaching the objective of incorporating 3P reserves. Then, we want to develop a master plan for the development of shale. After that, PEP aims to contain and reverse its production decline and increase profitability. We want to implement farm-outs and establish schemes for acquiring additional investment. The company would also like to raise gas production and improve exploitation. PEP will also increase operations safety and focus its maintenance budget. Lastly, we will reinforce operational efficiency and cost control.”

On unconventional projects: “Complex and unconventional areas have important volumes. The challenge is what to do to recover the oil with a better knowledge of the deposits, drilling of horizontal wells, fracking, artificial lift methods, secondary and improved methods of recuperation, and optimisation of production installations. Various options are being studied to see which are applicable to these areas.”

Most TOGY interviews are published exclusively on our business intelligence platform TOGYiN, but you can find the full interview with Juan Javier Hinojosa Puebla below.

What has PEP achieved since 2016?
In 2016, PEP implemented a new way of working, which allowed it to successfully endure a budget cut. First, as part of the federal government’s austerity efforts, in February 2016, PEP cut its budget by approximately MXN 60 billion [USD 3.32 billion] and revised its production goals to 2.136 million bopd and 5.809 mcf [164,510 cubic metres] of gas per day. Second, to meet these production goals while holding itself to the budget, PEP strengthened its work methodology, guaranteeing that any intervention be profitable and maintaining strict control over spending.
As a result of this methodology, PEP met its objectives. First, PEP met 100.8% and 99.8% of its oil and gas production targets, respectively. Second, the goal of incorporating reserves with 10% additional value from 666 million boe to 741 million boe was surpassed. Third, PEP achieved a more than 10% reduction in production costs with respect to 2015, and maintenance was reduced 22% versus 2015. Fourth, a significant reduction in critical breaches identified at the beginning of 2016 was managed, going from 20 to zero installations with intolerable criticality at the end of 2016.
Additionally, as a result of the energy reform, PEP succeeded in migrating Trion to an exploration and extraction contract with a partner. The process of assignment migration was initiated in Ek-Balam without a partner. The contract for exploration and extraction for Ek-Balam was signed May 2, 2017.
An important thing to consider is the financial order that our director has given us. The programme has been very strict and focused on efficiency and profitability, and our company has had very positive results in 2017.

How will PEP’s participation in Trion and Perdido Fold Belt Area 3 benefit the company?
By way of an exemplary and transparent bid, favourable terms were obtained for the Mexican state and Pemex, integrating the BHP Billiton-Pemex consortium, which represents the first partnership to explore and develop oil and gas reserves in deepwater. This partnership allows Pemex to complement its investment, share risks, accelerate its access to cutting-edge technology and assimilate the industry’s best practices. This will enable Pemex to count on the first production of hydrocarbons from the Perdido Fold Belt within an estimated period of six years.
The Perdido Fold Belt Area 3 represents the first block since the energy reform adjudicated in a competitive bidding process to a consortium that includes Pemex. This adjudication will allow Pemex – in addition to complementing its technological, operational and financial capacities – to consolidate its strategic position in the Perdido Fold Belt and strengthen its exploration portfolio, contributing to completing the goals of the business plan.
PEP is working to create partnerships with leading companies in the oil industry to improve technology to make it more efficient and for the sake of financing. This is why we’re working with farm-outs and some farm-ins. These are service contracts that we want to roll out, in addition to dealing with the migration of CIEPs [integrated exploration and production contracts] and COPFs [public works financing contracts]. We’ve received a great deal of support from authorities such as the SHCP [Secretariat of Finance and Public Credit] and SENER [Secretariat of Energy].

What are the main challenges in executing farm-out partnerships in the Perdido Fold Belt?
The main challenges for farm-outs in the Perdido Fold Belt are related firstly with the technical challenges of the area, principally with its saline tectonic environment and the water depths, which can reach more than 3,000 metres, requiring technical, operational and financial capacities on the part of the interested operating companies.
In the sustained environment of low oil prices in which the industry has been living through for more than two years, it is necessary that we bring together favourable elements such as an adequate fiscal regime, the capacity of operators to generate efficiencies and, in general, to ensure the assembly of the industry’s best practices to ensure value creation in deepwater projects.

What measures must Pemex take to increase ethane production, given the company’s economic restrictions?
We must increase the recovery factor of ethane. It is necessary to incentivise this by raising the price of ethane on the part of the Energy Regulatory Commission. Currently, cryogenic plants have an average ethane recuperation rate of 67%, against an average design of 79.9%.
It is estimated that up to 13,000 additional boepd can be obtained with an investment of MXN 1.516 billion [USD 79.8 million] to maintain the operational reliability of the cryogenics and increase the average recuperation rate to 74.4%; that is, increase the efficiency.

What is PEP doing to increase recovery in mature and declining fields, particularly in Cantarell?
Cantarell is a collection of mature fields, originally formed by the Akal, Nohoch, Chac and Kutz fields. Akal is the most important super-giant field that Mexico has and the largest marine field in the world, with an original volume of 30.685 billion boe.
The strategy that Pemex is applying to offset the decline in these mature fields is to implement relationships with investors to share the gains, but also risks, since for fields of this size, capital investment is very important. Various projects for the recovery of oil in the Akal field are being presented as next steps within the company and to our partners. For example, the recovery of 1% of the original volume of Akal represents 306 million barrels and is equivalent to the 1P reserves of many fields.

What progress has PEP made in extracting hydrocarbons from Ayatsil-Tekel-Utsil?
Those fields represent the first offshore development of extra-heavy crude in the world. No one in the world has developed this type of heavy viscous oil with a 22% hydrosulphuric acid and 8.5% carbon dioxide content from fixed platforms at depths of 114-122 metres.
Pemex started exploitation from the Ayatsil field through 10 wells in February 2015 and is already producing 50,000 bopd of extra-heavy crude. Few offshore fields that are 180 kilometres from the coast and at such a depth have that kind of yield. Currently, PEP’s development plan considers 54 wells in Ayatsil, 14 in Tekel and 10 in Utsil. The company has foreseen providing extensions to those to the east of Tekel and the south of Ayatsil.

What is PEP’s strategy to increase production from complex and unconventional areas?
Complex and unconventional areas have important volumes. The challenge is what to do to recover the oil with a better knowledge of the deposits, drilling of horizontal wells, fracking, artificial lift methods, secondary and improved methods of recuperation, and optimisation of production installations. Various options are being studied to see which are applicable to these areas.
Additionally, there are particular strategies such as presenting the business case for increasing Akal’s recovery factor. This strategy has as its objective the recovery of reserves in the Akal field, giving continuity to the development of a base of production and the development of new business opportunities through external investment looking to maximise PEP’s economic indicators.
Another strategy is to accelerate exploration and development of oil and gas in shale. This strategy consists of three key actions: creating an autonomous subsidiary to reach competitiveness in oil and gas activities in shale, implementing farm-outs of 100% of the Round 0 blocks to accelerate exploration and development of shale oil and gas plays, capturing new shale oil and gas blocks and developing strategic alliances with expert partners, and relaunching Chicontepec with a new business paradigm.

What are PEP’s objectives within Pemex’s five-year plan and what will be the company’s priorities for the next three to five years?
We would like to first establish an exploration model that permits reaching the objective of incorporating 3P reserves. Then, we want to develop a master plan for the development of shale. After that, PEP aims to contain and reverse its production decline and increase profitability. We want to implement farm-outs and establish schemes for acquiring additional investment. The company would also like to raise gas production and improve exploitation. PEP will also increase operations safety and focus its maintenance budget. Lastly, we will reinforce operational efficiency and cost control.

For more information on Pemex in Mexico, including the company’s new partnerships in the upstream sector, see our business intelligence platform, TOGYiN.
TOGYiN features profiles on companies and institutions active in Mexico’s oil and gas industry, and provides access to all our coverage and content, including our interviews with key players and industry leaders.
TOGY’s teams enjoy unparalleled boardroom access in 35 markets worldwide. TOGYiN members benefit from full access to that network, where they can directly connect with thousands of their peers.