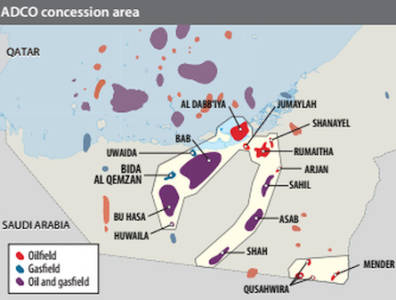 Adco hopes to raise production in the concession area to 1.8 million bopd by 2017.

Central to the success of this initiative is the input of IOCs.

Abu Dhabi Company for Onshore Petroleum Operations (Adco), established in 1960 and led by Saif Ahmed Al Ghafli, operates as a subsidiary for the Abu Dhabi National Oil Company (ADNOC). The Adco concession area includes the 15 major onshore oilfields of Abu Dhabi, which together represent more than half of the emirate’s production.

The initial concessions expired in 2014, and since then ADNOC has signed new concession agreements with Total in January 2015, Japan’s Inpex in April 2015, GS Energy in May 2015 and, most recently, BP in December 2016. Adco hopes to raise production in the concession area to 1.8 million bopd by 2017. Central to the success of this initiative is the input of IOCs with the experience and technical skills to boost output.

TOTAL:
Total was the first IOC to sign a new concession agreement after the previous generation’s expiry in 2014. Total’s 9.5% interest in the previous 75-year concession was replaced with a 10% interest that will remain valid until January 1, 2055. The agreement saw Total pay USD 2.2 billion and become asset leader of the Bu Hasa, Sahil, Asab, Shah, Qusahwira and Mender fields, which together make up two-thirds of Adco’s production.

INPEX:
Inpex, through its Japan Oil Development Company (Jodco), has a 5% stake in Adco. This represents a further strengthening of ties between Japan and Abu Dhabi. A total of 40% of Japan’s oil lifting volumes come from oil concessions offshore Abu Dhabi, and this new concession will be indispensable in helping Japan meet its goal of sourcing 1 million boepd of imports from the UAE by the early 2020s, a doubling of current volumes. The agreement also represents Japan’s first acquisition in the Middle East that will not send shipments through the Strait of Hormuz.

GS ENERGY:
GS Energy, an independent South Korean energy company incorporated on January 3, 2012 from GS Holdings’ spinoff of its refining, marketing, chemicals and transportation arm, acquired a 3% share in Adco in May 2015. This came in a year in which the company made several large acquisitions of other Korean energy companies. The deal also follows years of collaboration between GS Energy and ADNOC in Abu Dhabi’s Haliba field where GS Energy now holds a 10% stake, having originally acquired a 6% stake in 2012.

BP:
The latest concession agreement gave BP a 10% interest in Adco, replacing the 9.5% concession agreement which it had held since the 1970s. BP paid the government of Abu Dhabi under a share swap that saw Abu Dhabi become one of the biggest shareholders of the company. BP also became asset leader of the Bab asset group. Through its other Abu Dhabi shareholdings, BP sources a net production of 95,000 bopd from the emirate. BP expects to collect 165,000 bopd following this deal, bringing total oil production in Abu Dhabi to 260,000 bopd in 2017.

MORE TO COME:
Having completed the agreement with BP, the Supreme Petroleum Council will continue evaluating proposals with the advice of ADNOC in hopes of completing negotiations for the remaining 12% stake in Adco. The list of contenders has grown smaller and it is expected that ADNOC will look to bring in at least one Chinese partner as the two countries try to deepen their trade relationship.
State-owned China Petroleum Engineering and Construction Corporation, parent of PetroChina, is at the top of the list of contenders. Other bidders include Shell, Statoil and an Indian consortium led by ONGC Videsh.