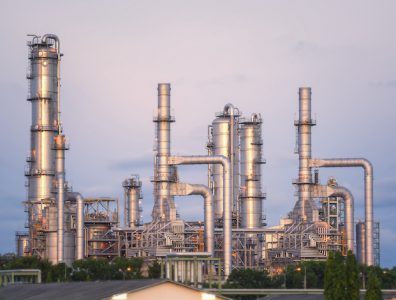 The new facility alone is expected to save around USD 300 million per year on petrol imports by lowering Angola’s reliance by 15%.

Petrol production of new complex at the refinery: 1.5 million litres per day

Angola’s sole refinery has undergone a deep refurbishment to meet the country’s goals of becoming less dependent on imports and improving local capacities. Sonangol teamed up with Eni to develop the project, which marks the beginning of a refining revolution in the country as other major projects move towards completion.

Established in 1958, the Sonangol-operated Luanda Refinery previously processed only 65,000 bpd, which met only 20% of the country’s growing demand for refined fuels. To revitalise the ageing asset and localise Angola’s oil and gas sector, the NOC signed an agreement with Eni in June 2018 to improve the asset’s production processes.
Eni chose KT – Kinetics Technology to provide EPC works consisting of the contractor’s in-house naphtha hydrotreater unit and a platforming unit. The development also included reducing the facility’s dependence on fuel oil in its furnaces by 70%, producing 10 MW of power generation through hydrogen and increasing the production of LPG at the site.
In July 2022, President João Lourenço inaugurated the new petrol production complex at the Luanda Refinery, which increased petrol production at the facility from 395,000 litres per day to 1.5 million litres per day and its refining capacity by four times. According to Eni, the facility will produce 450,000 tonnes per year at full capacity.

WIDER IMPACT: Prior to the USD 235-million expansion project, lack of investment in the country’s oil and gas infrastructure caused Angola to spend more than USD 1.7 billion on oil imports per year to meet demand, despite its large reserves of 8.2 billion barrels of proven oil and 382 bcm (13.5 tcf) of gas. The new facility alone is expected to save around USD 300 million per year on petrol imports by lowering Angola’s reliance by 15%.
In addition, the upgrade moves the dial up on the country’s know-how in the refining field. “Many Angolan staff and technicians participated in the construction of this new catalytic reform unit and its inauguration will create new direct and indirect jobs that will greatly contribute to the improvement of the living conditions of our population,” Minister of Mineral Resources, Petroleum and Gas Diamantino Pedro Azevedo told local press.

NEW FUEL FOR THE FIRE: While the upgrade is a large piece in the puzzle for the country to become self-reliant, it is not the only downstream development in the works expected to have a large impact. The Ministry of Mineral Resources, Petroleum and Gas is also working on three new refineries in Cabinda, Soyo and Lobito that will raise the country’s refining capacity to 360,000 bpd.
The USD 1-billion Cabinda Refinery is being developed in three phases with a final refining capacity of around 60,000 bpd. Construction of the Soyo Refinery began in May 2022, with a planned refining capacity of 100,000 bpd. Finally, the Sonaref Refinery in Lobito will have the capacity to produce 200,000 bpd. These downstream projects combined are set to revolutionise Angola’s economy by lowering its dependence on foreign refining power and modernising its workforce.