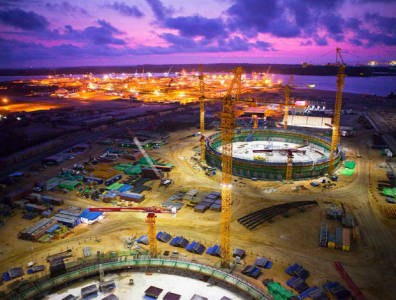 The latest in a string of technical difficulties, a pipe rupture on a flare line at Angola’s new $10-billion LNG plant forced a shutdown that is expected to last until mid-2015. If operational at its full capacity of 5.2 million tonnes of LNG per year, the plant would be one of the largest LNG projects in Africa, allowing the export of gas that would otherwise be burned off due to a lack of domestic demand.

Located in Zaire, the plant includes an LNG train that can process 28.4 mcm (1 bcf) of natural gas per day. Angola LNG’s facility has 360,000 cubic metres of LNG storage, LPG and condensates storage and a loading jetty.

A RECORD INVESTMENT: Plant operator Angola LNG was first formed in 2008 as a joint venture between international oil companies Chevron (36.4 percent), BP (13.6 percent), Eni (13.6 percent) and Total (13.6 percent), in addition to the national oil company Sonangol (22.8 percent). Constructed by US construction and engineering contractor Bechtel, the plant became operational in 2013 and shipped its first LNG in June of that year. At the time, Angola LNG was the single largest investment ever made in the country and its target was to supply growing demand particularly from the US.

PROBLEMS IN THE PIPE: The rupture, which occurred on one of the plant’s flare lines in April 2014, is under investigation. Bechtel will address the plant’s technical issues. Since construction, the plant has suffered from a string of technical setbacks that have hampered production. Total expressed disappointment with the delays in production at Angola LNG after the recent rupture, though none of the stakeholders have openly discussed abandoning the project yet.

TECHNICAL ISSUES: The Angola LNG project has suffered from an array of technical issues since construction first began. Commissioning of the plant was delayed by 18 months due to fires, pipeline collapses and labour shortages. Following the start of operations, a compressor leak in February 2014 delayed production and reduced output to less than 50 percent of capacity. The plant was already operating considerably below capacity when the latest pipe rupture forced a complete shutdown.

CAPSIZED RIG: In addition to technical difficulties at the plant itself, problems at the gasfields intended to supply the plant have interrupted the flow of gas and forced lower production. In July 2013, Eni subsidiary Saipem drilling rig Perro Negro 6 capsized while laying new pipeline linking blocks 0 and 14 of Chevron’s gasfield to the liquefaction station. The blocks were intended to supply the plant with as much as 4.81 mcm (170 mcf) of gas per day, yet the capsized rig forced Angola LNG to source gas from other blocks, limiting plant capacity.

Salvage operations are currently under way on the rig, which sank while attempting to drill a tunnel beneath an underwater canyon. At least one crewmember died in the capsizing, and the rig is lying on its side half-submerged. Salvage work is expected to take 10 months and should finish in March 2015.

WORLD GAS SUPPLY: Angola holds natural gas resources of 297 bcm (10.5 tcf) and the country’s success of Angola LNG is in large part dependent on world gas prices. Since construction first began on the project in 2008, the shale gas boom in North America has largely curtailed demand for imports in African gas in the world’s largest energy market.

Angola LNG has since turned to the spot market, selling its cargoes rather than selling under long-term contracts. The plant has shipped five LNG cargoes as well as LPG and condensates cargoes to China and Brazil. Chevron has refocused their efforts on exports to Asia, and some of the shipments that Angola LNG has made so far have been delivered to China and Japan.