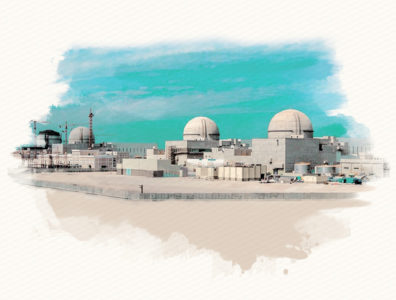 Generation capacity of each reactor:1.4 GW

Share of the UAE's electricity demand to be supplied at completion:25%

Effective reduction in carbon emissions due to new plant:21 million tonnes per year

PROGRESS: Having been connected to the UAE’s transmission grid in August 2020, units 1 and 2 of the plant are completed. As of September 2020, the construction of units 3 and 4 stood at 93% and 87%, respectively.

In October 2016, ENEC and KEPCO signed a JV agreement for a long-term partnership and co-operation on the UAE’s Peaceful Nuclear Energy Programme. With the signing, two new companies were established:

> Barakah One Company is an independent subsidiary owned by both companies which represents the commercial and financial interests of the Barakah project. ENEC is the majority owner with an 82% stake, while KEPCO holds the remaining 18%.

> Nawah Energy Company is a subsidiary of ENEC and is mandated to operate and maintain Barakah’s units. KEPCO has an 18% stake, while ENEC holds 82%.

> Installed capacity: The plant consists of four identical APR1400 reactors housed in four separate units, with a total power generation capacity of up to 5.6 GW.

> Demand: Will supply up to 25% of the UAE’s electricity needs once fully operational.

> Milestone: The Barakah plant is the first nuclear energy station to be constructed in the Arab world.

> Carbon footprint: The plant will eliminate the release of 21 million tonnes of carbon emissions per year, equivalent to removing 3.2 million cars from the roads.

> Clean energy: The Barakah plant is the largest source of clean baseload electricity in the country.

Power capacity: Each reactor can generate up to 1.4 GW of electricity