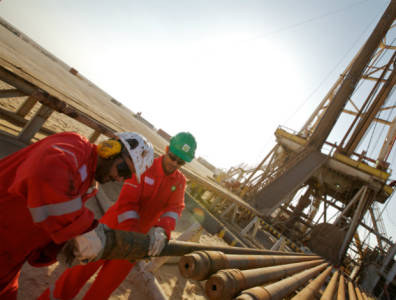 In December 2013, super-major BP signed the final gas sales and an amended production-sharing agreement for the Khazzan and Makarem gasfields in block 61, located in central Oman. The fields contain a mix of sour and sweet gas in four tight reserves: Barik, Miqrat, Amri and Buah. Together, they are estimated to hold a potential 2.83 tcm (100 tcf) of gas.

BP holds a 60-percent stake in the project and state-owned Oman Oil Company Exploration and Production has the remaining 40 percent. The production-sharing agreement that BP has just entered into is for a 30-year period and allows the super-major to appraise more gas resources in block 61 in the future. Total investment is estimated at $16 billion, with about $1.5 billion spent to date.

Production at the Khazzan field is targeted for late 2017, followed by a plateau of around 28 mcm (1 bcf) in 2018, which would lead to an increase of around 30 percent in Oman’s gas supply. The super-major also expects around 25,000 barrels of oil equivalent per day of gas condensate. In total, BP hopes to produce around 198 bcm (7 tcf) of gas from the Khazzan project.

BP Oman general manager Dave Campbell said, “2014 is about mobilisation, plus the award of major contracts. We are already drilling our first development well. We are also pleased to be working with the Ministry of Oil and Gas in-country value committee and are looking at ways to support the production of the chemicals we will need for the drilling operations locally in Oman.”

IN A TIGHT SPOT: Development of Khazzan and Makarem proves a challenge compared with normal production due to the tight nature of the gas in place. The rock in block 61 is hard and requires stimulation and hard rock drilling. As the operator, BP will drill into sandstone depths of about 4,500 metres and use hydraulic fracturing technology to extract the gas. The company is also implementing an appraisal programme and subsurface data gathering over the area, as well as extended well testing. Full field development will involve the drilling of 300 wells and the use of eight rigs. The project is currently the largest new upstream project in Oman.

SINCE DISCOVERY: The Khaazan and Makarem fields cover an area of about 2,800 square kilometres and were discovered in 1993. In January 2007, BP signed an exploration and production agreement for the appraisal and development of the fields. In March 2011, the first gas was delivered from BP’s extended well test project. The following year, BP completed testing of a horizontal well in the Amin reservoir and began testing in the Barik reservoir. In September 2013, the company contracted the Dalma-5 rig and spudded the KZN-14 well in Khazzan.

FRIENDS OF THE FIELD: In early 2014, BP contracted several oil and gas services companies at the project. Two UK services providers have been awarded contracts at Khazzan: Petrofac and KCA Deutag. Petrofac holds the $1.2-billion engineering, procurement and construction contract for Khazzan’s central processing facility, which has two process trains with a capacity of 14.8 mcm (525 mcf) per day. KCA Deutag has been awarded a $220-milion, five-year contract for the construction and operation of three moving land rigs.