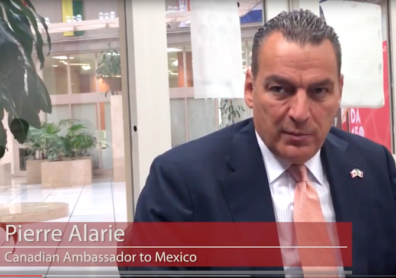 “We reached a historical moment in the bilateral relationship between Canada and Mexico.”

US oil exports to Canada and Mexico in 2016250 million barrels

Canada and Mexico have never been closer

Pierre Alarie, Canadian ambassador to Mexico, recently spoke to TOGY about the bilateral relationship between Canada and Mexico, the importance of economic and trade relations, potential growth opportunities and the increasing level of co-operation between the two North American countries.

At the start of NAFTA talks last week, US Trade RepresentativeRobert Lighthizer said that “for countless Americans, [NAFTA] has failed.” Canada and Mexico tried to take a conciliatory tone.

Canada’s foreign minister Chrystia Freeland said, “We pursue trade, free and fair, knowing it is not a zero-sum game.” Mexican Secretariat of Economy Ildefonso Guajardo said, “For a deal to be successful, it has to work for all parties. Otherwise it is not a deal.”