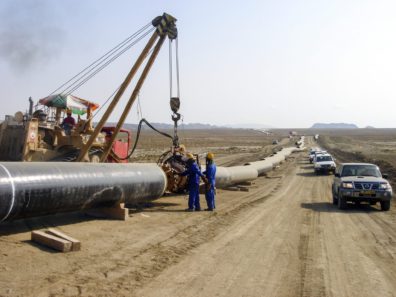 At a ceremony commemorating the 20th anniversary of the Azeri-Chirag-Guneshli production-sharing agreement, the government of Azerbaijan broke ground on its most ambitious venture yet: the expansion of the Southern Caucasus Pipeline (SCP), setting the stage for developing the Southern Gas Corridor.

The existing SCP is set to link with the planned Trans-Anatolian Pipeline (TANAP), which, in turn, will connect to the Trans-Adriatic Pipeline (TAP). This chain will transport oil from Azerbaijan’s Shah Deniz field to Turkey and Southern Europe. Though only providing a fraction of the total demand in those regions, the pipeline is a step toward diversification, providing a stable supply at a time when tensions between Russia, Ukraine and the EU have led to arguments over energy contracts and pricing that threaten to disrupt supply.

Progress on the Southern Gas Corridor is partly due to the declining fortunes of Russia’s competing South Stream project. In recent months, the EU has asserted that the project falls under new regulations that diminish Russia’s role. Though prospective-member countries such as Serbia may still construct their portions, EU members such as Bulgaria are bound by EU policy. These disagreements have delayed the project and created opportunities for EU countries such as Italy, through which the TAP will pass, to become regional energy centres.

Seeing an opportunity, the Azerbaijani and Turkish governments have moved quickly. In 2014, the former established a joint stock company, backed by the state oil fund, to oversee the project. Although Azerbaijan continues to take the lead in both the SCP and TANAP projects, Turkey has begun to take a larger role with state-owned BOTAŞ raising its stake in TANAP from 20 percent to 30 percent and Turkish Petroleum buying a 10-percent stake in the Shah Deniz 2 gasfield project formerly held by Total. Beyond the planned SCP-TANAP-TAP linkage, there is also the possibility of joining up with Iranian and Turkmeni pipelines. In the latter case, both the US and EU have voiced their support for the creation of a Trans-Caspian Pipeline.