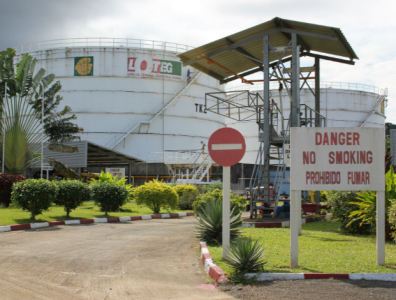 In 2013, Luba Oil Terminal Equatorial Guinea (LOTEG) increased its gasoil sales to exploration companies for drilling campaigns by more than 200 percent over its 2011 figures, to more than 150,000 tonnes. It is the only distributor of gasoil and lubricants at the Luba Freeport, on Bioko Island, where the company is expanding its storage facilities.

“The first phase in our plan was to build a facility for supplying LOTEG’s oil products locally. For the second, we have developed new facilities to supply lubrication products and hired and trained new employees for them,” Franck Etienne Sauvalle, LOTEG’s director general, told TOGY. “We have been ready to begin these new activities since January 2014. However, they have been delayed while we wait for an official safety accreditation from the government.”

SPREAD OUT: The company is considering expanding its facilities at Luba Freeport further if the port expands and needs additional supplies, but it plans to diversify its activities over 2014. “We have built our new supply facilities and are training the staff to perform these new operations, which will include distributing diesel and lubricants, as well as perform laboratory services,” he said.

LOTEG is the only provider of oil product analysis at the port. Its laboratory is managed by product-inspection firm SGS. “Previously, products had to be sent abroad for analysis, to Cameroon, Gabon, France and the US. Our laboratory can analyse all hydrocarbons products in Equatorial Guinea,” Sauvalle said, adding that he hoped the company would form a partnership with the Ministry of Mines, Industry and Energy to analyse all the country’s oil products locally.

The company is also looking at moving into retail service stations, such as on Bioko Island and in Río Muni. “For the moment, we are concentrating on beginning to supply gasoil and lubricants, and our oil product analysis. Our next move will depend on the results of this diversification,” Sauvalle said.

LOTEG is a joint venture between GEPetrol and Switzerland-based Tacoma Oil Trading. It was established in 2005.