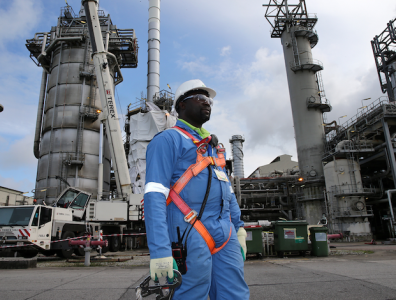 Most importantly, the project will be a native incubator of opportunities.

In an era when the dual shock has caused major hydrocarbons projects to be shelved, Nigeria is proving resilient. Nigeria LNG (NLNG) recently sealed a multi-billion-dollar EPC contract which will kick off the construction of Train 7 in its Bonny Island LNG complex. The expansion will consolidate the nation as one of the world’s most prominent gas hubs, and help leverage its abundant gas reserves.

NLNG is a joint venture between NNPC (49%), Shell (25.6%), Total (15%) and Eni (10.4%). Situated on the Bight of Biafra, the Bonny Island LNG facility plant holds six liquefaction units, which have a combined production capacity of 22 million tonnes per year (tpy) of LNG and 5 million tpy of NGLs. Feedstock of 99.1 mcm (3.5 bcf per day) is obtained from various fields in the Niger Delta.
The LNG produced is channelled into 16 long-term sales purchase agreements (SPAs) with 10 different buyers. Galp and Total recently renewed their deals, each for a 10-year span starting in 2021, while others expect to do the same soon. The complex generates 6% of global LNG exports.

FORWARD STEPS: In a time of crisis, NLNG has proven its resilience by taking the FID to go forward with the construction of the greenfield LNG train. In May 2020, the EPC contract was awarded to an alliance of Saipem, Chiyoda and Daewoo. The total value of this deal exceeds USD 4 billion, where Saipem, as the leader, will have a 60% share, which equates to USD 2.7 billion.
The expansion will include the construction of a 7.6-million-tpy liquefaction unit, a storage tank of 84,200 cubic metres, a condensate tank of 36,000 cubic metres and three gas turbine generators. With the new train, Nigeria expects to increase the plant’s total LNG capacity by 35%, reaching 30 million tpy. Following the same design used for Train 6, the venture aims to deliver its first LNG shipment by 2024.
The Train 7 project reveals how Nigeria is weathering the Covid-19 storm. The entire value network of the venture is set at USD 10 billion-12 billion. This includes the EPC phase and the development of natural gas assets for extra feedstock, as well as new pipelines to supply it.
The financial arrangements are complex. USD 3 billion will be financed using a multi-tranche funding scheme wherein an array of third-party actors, including export credit agencies (i.e. KEXIM, K-SURE, SACE), development finance institutions (i.e. Afreximbank, Africa Finance Corporation), 16 international commercial banks and 10 local banks will participate. This sets a precedent in the sector, as it represents the first large-scale LNG project funded by multi-source corporate financing.
Such enthusiasm among investors is expected to entice further inflow of FDI into the country. “We are quite pleased that the Train 7 EPC deal was signed during these difficult but crucial times,” Chief Timipre Marlin Sylva, minister of state for petroleum resources, told The Energy Year. “It tells the global investment community that Nigeria is prepared to beat the crisis.”

CREATING OPPORTUNITIES: Train 7 comes at a difficult time. Experts forecast that natural gas demand will fall by 2% this year, affecting the price for spot LNG, which will remain low until 2021. By contrast, the production of LNG has kept its pace, as plants are designed to run at high utilisation rates. This has led to an inevitable supply glut which has resulted in many Nigerian LNG cargoes adrift with no buyer in sight. Those under SPAs are delaying deliveries by easing up shipping speed or chartering longer routes until prices pick up.
Given the circumstances, NLNG has been compelled to adopt a series of flexible measures that guarantee a controlled start-up of the project. EPC works will be limited during the first 12 months while major manufacturing will remain on hold until the situation normalises. Despite the challenges, the fact of Train 7 being a five-year term expansion is ideal, as it will boost local development, giving time for the sector to recover.
Most importantly, the project will be a native incubator of opportunities. At its peak, its construction is expected to employ more than 10,000 workers, with the total in-country engineering man-hours set at 55%, surpassing the level stipulated by the Local Content Act.
More than 70,000 tonnes of material will be used to fabricate the condensate stabilisation unit; non-cryogenic vessels, tanks, flare systems and pipe racks which will be assembled locally; and all LV and HV cables, valves, protective coating, and sacrifice anodes will be purchased from indigenous vendors. This will reactivate the local supply chain but also create spinoff opportunities in the areas of civil construction, logistics and maintenance.
The Train 7 project will have a major impact on Nigeria’s energy projections. NLNG expects to increase its annual shipments from Bonny Island to become the fifth-largest global LNG supplier. The government will generate up to USD 20 billion from these activities, a vital boon for its economy.
In addition, the expansion will increase the plant’s total LPG production, which today stands at 1 million tpy. The demand for LPG has grown in Nigeria over recent years, and Train 7 will cater for the domestic market, with NLNG taking more than 40% of the market share.
Lastly, the need for additional feedstock for the new train will ramp up upstream activities in the region, developing non-associated gasfields and reviving stranded gas assets. “The signing of the LNG Train 7 EPC contract is a clear testimony to the country’s huge undiscovered gas potential,” Engr. Sarki Auwala, director and CEO of Nigeria’s Department of Petroleum Resources, told The Energy Year. “We have great in-country capacity and potential for gas-based industries that need to be developed.”

A GAS-FUELLED FUTURE: Nigeria is a gas haven within Africa, holding around 5.4 tcm (190.7 tcf) of proven reserves. The government has underlined the need to increase its non-oil-related backlog by shifting into gas as a more sustainable source. As managing director of NLNG Engr. Tony Attah said: “Nigeria has ridden on the back of oil for more than 50 years, it is now time to fly on the wings of gas.”
And indeed, energy paradigms seem to be shifting in a country that has declared 2020 the “year of gas.” Given the oil crash, strategies to diversify into natural gas have strengthened. NNPC’s larger ambition is to increase the number of trains at Bonny Island to 12. LNG demand is expected to double by 2040, so the expansion of this complex will be vital to meeting the world’s future energy demand, and will remain a keystone in the nation’s growth agenda.
Similarly, Nigeria’s gas output is expected to rise in coming years, as seen in the efforts made by IOCs and local E&P firms to exploit non-associated gasfields. So far, gas has been mainly used for LNG exports, while only 10% is destined for domestic consumption.
The country has struggled to maximise its gas value for domestic use due to frail infrastructure and an unfavourable regulatory regime. However, NNPC has made laudable efforts to reverse the situation. In February 2020, the Nigerian Gas Transportation Network Code was launched, aiming to integrate the local gas market. This new regulation is poised to advance local gas infrastructure, promote gas-to-power and gas-to-industry projects, and decrease gas flaring.
All in all, the government is making inroads for the establishment of LNG, LPG and CNG initiatives, setting firm grounds on which projects such as Train 7 will run efficiently in the future.