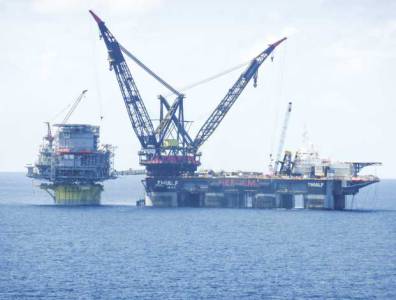 Oil businesses with extensive experience in ultra-deepwater operations such as BP, Chevron, Shell and ExxonMobil, have also set their gaze on the Perdido Fold Belt.

Located across the maritime border between the US and Mexico, the Perdido Fold Belt is a geological formation that encompasses an area of 40,000 square kilometres, situated in the northwestern part of the Gulf of Mexico. While drilling hydrocarbons operations commenced at the formation in 2006, the first significant finds were made more recently, in 2012.

Exploratory wells drilled at the belt by Mexico’s national oil company Pemex including the Trion-1, Supremus-1, Maximino-1, PEP-1 and Vespa-1. The latest discovery, Exploratus-1, was made in January 2014. The Exploratus-1 was an exploratory well in 6,130 metres of water. It hit 150 million to 200 million barrels of light crude oil, according to preliminary analysis, in an area that is thus far characterised by harbouring medium-heavy crude oil.

Oil businesses with extensive experience in ultra-deepwater operations such as BP, Chevron, Shell and ExxonMobil, have also set their gaze on the Perdido Fold Belt. Pemex, which cannot claim the same expertise, will seek co-operation to fully exploit the potential of the Mexican waters.

Numerous memoranda of understanding have been signed to set the tone for potential partnerships with Pemex in the development of these offshore fields. Among the companies that have entered into agreements are Shell, Italy’s Eni and Australian exploration and production company BHP Billiton, underlying an approach for an exchange of oil and gas technical knowledge, information, experiences and practices.

Given Shell’s wide experience in the US portion of the Perdido Fold Belt, which accounts for 50 percent of its oil and gas production in the US, the Anglo-Dutch company is among the most suitable associates for development of the system. Marvin Odum, Shell’s Upstream Americas director, has expressed that there is no plausible reason by which the geological formation should be any different on the Mexican side. “I get very enthusiastic about that because I see huge potential there,” he was reported by Reuters as having said in November 2014.

Shell is seeking to collaborate with Pemex through joint ventures in both the Trion and Exploratus deepwater fields. Gustavo Hernandez, the head of Pemex Exploration and Production, has stated that the state-owned entity is not interested in becoming the operator for Trion, owing to cost, risk and expertise. With an estimated 305 million barrels of oil equivalent, the Trion field will demand investments of around $8 billion. Exploratus, comparatively, will require a total investment of around $3.2 billion.

All in all, the formation might not only assume the role of a lifebuoy for Pemex, but also for the country as a whole. Specifically, the state of Taumalipas will greatly benefit from operations such as these, as the nearest land hub. Due to its proximity to both the Perido Fold Belt and another Mexican crucial geological formation, the shale gas reserves of the Burgos Basin, the northern state is expected to be at the centre of significant transformations from 2020-2025.