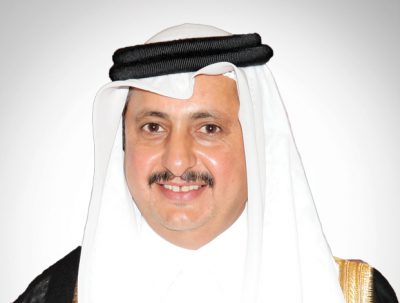 Qatar’s economic growth has and will continue to be accompanied by openness to world markets.

H.E. Sheikh Khalifa bin Jassim bin Mohammed Al Thani, chairman of the Qatar Chamber of Commerce & Industry, talks to TOGY about how Qatar is achieving the pillars of its National Vision 2030 by diversifying and strengthening its economy in the face of the blockade. Qatar Chamber promotes business activity in Qatar with financing and support for economic initiatives.

• On incentives for investment: “During the past few years, the Qatari government provided many attractive incentives for national and foreign investors. These include facilities in ownership and exemption from Customs duties on imports of machinery, equipment and spare parts. They also include exemption from export duties or taxes on corporate profits for predetermined periods.”

• On the embargo: “Qatar was not affected because it has huge resources, ambitious economic strategies and positive relations across the globe. Qatar explored and successfully found alternative sources of goods which were previously being imported from the siege countries; we launched direct shipping routes from the Hamad Port with ports in China, Oman, Kuwait and other friendly countries.”

Most TOGY interviews are published exclusively on our business intelligence platform, TOGYiN, but you can find the full interview with H.E. Sheikh Khalifa bin Jassim bin Mohammed Al Thani below.

How would you describe the business and investment climate in Qatar?
Qatar provides a highly lucrative and attractive investment destination. It constitutes an example of economic excellence regionally and internationally. Its economic privilege is based on a clear vision that depends on the strategic use of the country’s surplus from oil and gas, and its foreign investment policy, with the aim of developing a competitive and open economy.
This economic vision and strategy provide bigger investment opportunities for the private sector and aim to broaden economic relations with countries worldwide. Qatar’s economic growth has and will continue to be accompanied by openness to world markets, which will help foster a better investment climate locally.
In this regard, the Qatari government has introduced a number of incentives for foreign investors and issued a series of laws and acts of legislation that have helped simplify doing business in the country and attracted more domestic and foreign investments. There are unrivalled opportunities for investment in Qatar in many of its sectors, namely in manufacturing, hospitality, real estate, energy, health, education and other areas.
During the past few years, the Qatari government has provided many attractive incentives for national and foreign investors. These include facilities in ownership and exemption from Customs duties on imports of machinery, equipment and spare parts. They also include exemption from export duties or taxes on corporate profits for predetermined periods.
I firmly believe that the period ahead will witness new reforms and incentives for business, thereby improving the investment climate in the country, especially in light of the emir’s directives that stress the need to open Qatar’s economy to investments and initiatives so that the country becomes a producer of food and medicine.

Qatar has set a number of mid- to long-term development and diversification plans, including in the oil and gas industry. How feasible are these plans and what are some of the challenges in meeting these targets?
The wise leadership of Qatar adopted a very ambitious vision which constitutes a national target for the advantage of Qatar’s citizens and expatriates. Qatar National Vision 2030 was launched to serve as a clear roadmap for Qatar’s future. It aims to transform Qatar into an advanced society capable of achieving sustainable development by 2030.
Qatar’s 2nd National Development Strategy (NDS2) 2018-2022 was launched this year [in 2018]. It is part of a series of successive development strategies that translate the targets of Qatar National Vision 2030 and its four pillars.
This year also witnessed the signing of new project contracts worth QAR 29 billion [USD 7.9 billion], aimed at promoting economic diversification, food security projects, the small and medium-sized enterprise (SME) sector, and the development of freezones and special economic zones.
During the past few years, Qatar achieved most of its diversification and development plans. It has managed to build a strong and resilient economy, becoming one of the fastest-growing economies in the world. It also paved the way for the private sector to play a key role in the economy and participate in the mega-projects implemented in the country.
To achieve these strategies, Qatar managed to overcome all challenges and difficulties. It faced an unjust siege aimed at curtailing its sovereignty and hindering its progress. The State of Qatar has been and remains strong. All economic plans are on track and all infrastructure works and projects related to the World Cup 2022 are ongoing and were not affected by the siege.
In general, I’m pleased to say that the siege failed to hinder the country’s development strategies and its economic growth. On the contrary, the siege constituted an impetus for further solidarity, steadfastness and self-dependence.

What effect has the blockade had on local businesses and the wider economy?
Thanks to His Highness the Emir Sheikh Tamim bin Hamad Al Thani’s wisdom and leadership, the siege imposed on the country for more than one year has had no impact on the national economy, though it had a slight impact on local businesses. Most of its effects were temporary as new trade routes were swiftly established.
Qatar was not affected because it has huge resources, ambitious economic strategies and positive relations across the globe. Qatar explored and successfully found alternative sources of goods which were previously being imported from the siege countries; we launched direct shipping routes from the Hamad Port with ports in China, Oman, Kuwait and other friendly countries.
During this period, new military, security, economic, commercial and other agreements have been signed with the world’s major powers. The visits of His Highness the Emir Sheikh Tamim bin Hamad Al Thani to European, Asian and African nations promoted and widened bilateral relations with countries in these continents. In other words, Qatar’s bilateral relations with other countries have almost doubled.
The non-hydrocarbon sectors like construction and manufacturing won’t see any disruptions thanks to the alternate supply chains established since the crisis. All infrastructure projects and those that are related to the 2022 World Cup are on track. All economic sectors proved resilient, healthy and stable.
I’m pleased to say that the best thing that could have happened to Qatar is this siege. Qatar managed to turn the crisis into advantage. The siege triggered Qatar to rethink its sustainability and independence and to set itself up for the future. It opened new channels of co-operation with other friendly countries. It encouraged Qatar to open its doors to new regional and international markets.
The siege motivated the country to speed up the completion of its projects to ensure and promote self-sufficiency and food security. New factories were built. About 17% of the total number of factories operating in the country were opened during the siege. Thousands of farms and new companies in all sectors have been established.

Qatar is pursuing new partnerships and investing heavily in overseas projects, most prominently in the oil and gas industry. What is the impetus behind these actions and is the current pace of overseas investment sustainable in the long run?
Qatar is considered one of the leading countries in outward investments. Its overseas investments are spread across 80 countries. Qatar’s outward foreign direct investment significantly supports the country’s economic diversification strategies and provide financial revenues for future generations. This investment policy relies on adopting investment opportunities with minimal risk and maximum profit.
There is no doubt that Qatar’s economy has successfully managed to overcome the siege without liquefaction of any of the Qatari long-term outward investments. Meanwhile, the Qatar Investment Authority (QIA) demonstrated that the pace of acquisitions continued with new assets and projects in many countries.
Indeed, Qatar’s outward investments are not limited to the QIA’s investments, but there are multiple private Qatari companies that have invested in several countries across a wide range of sectors in real estate, hotels, hospitality, agriculture, capital markets, food security and many other sectors. In this regard, the Qatar Chamber organised several business visits to friendly countries to help Qatari investors find new investments in these countries.
The chamber also hosts foreign trade delegations to provide good opportunities for Qatari businessmen to explore investment opportunities in these countries. This certainly contributes to boosting the country’s economy and income diversification strategies.
I’d like to affirm that the chamber is very committed to encouraging Qatari businessmen to invest abroad and promote foreign investors to invest in Qatar. This significantly opens up the way for establishing Qatari-foreign partnerships to implement mega-projects that add value to the national economy and support the sustainable development strategies and the Qatar National Vision 2030.

What key measures is the government taking to develop the private sector and how feasible is the goal of creating a knowledge-based economy to become self-sufficient?
The Qatar National Vision 2030 stresses a diversified economy that gradually reduces its dependence on the hydrocarbons industry, enhances the role of the private sector and maintains its competitiveness.
To diversify its economy, Qatar has taken steps such as investing in foreign assets; introducing regulations to stimulate economic growth; establishing freezones; encouraging a knowledge-based economy; and promoting itself as a tourist destination leading up to the 2022 FIFA World Cup.
In addition, Qatar has paved the way for the private sector to play a greater role in the national economy by adopting government-led initiatives to further develop the sector and increase its contribution to the national economy.
Acting on the directives of H.H. the Emir Sheikh Tamim bin Hamad Al Thani, Prime Minister and Interior Minister H.E. Sheikh Abdullah bin Nasser bin Khalifa Al Thani announced several regulations to help promote the private sector’s role in the country.
These included the reduction of rental value by 50% for all investors in the logistics areas of the Economic Zones Corporation in south Qatar during 2018 and 2019, as well as an increase in the percentage of purchasing local products from 30% to 100% if the local product meets Qatari specifications and standards, as well as the financial facilitation provided by QDB [Qatar Development Bank].
The government’s clear support for SMEs will help turn Qatar from an oil-based economy into a knowledge-based one. The world over, SMEs are the backbones of economies. I strongly believe these steps set us on the right track and further promote the private sector in the sustainable economy process. These measures will significantly open the door for establishing more high–tech firms and new knowledge-focused businesses.

How do you envision project spending beyond the 2022 World Cup?
The level of projects will continue after the 2022 World Cup, and this is a very important issue. It is known that more than USD 200 billion will be spent in total in preparation for the tournament. This figure covers not only stadiums but huge and costly projects such as roads, a new airport and hospitals.
But what will happen after the international tournament ends? There are more than 150 large-scale projects to be offered after 2022 including infrastructure projects, roads and construction of buildings, hospitals and schools. The pace of projects will continue as usual. I strongly believe that the private sector will play a greater role in these projects in partnership with the public sector to reach the objectives of Qatar National Vision 2030.

For more information on Qatar Chamber, see our business intelligence platform, TOGYiN.
TOGYiN features profiles on companies and institutions active in Qatar’s oil and gas industry, and provides access to all our coverage and content, including our interviews with key players and industry leaders.
TOGY’s teams enjoy unparalleled boardroom access in 35 markets worldwide. TOGYiN members benefit from full access to that network, where they can directly connect with thousands of their peers.