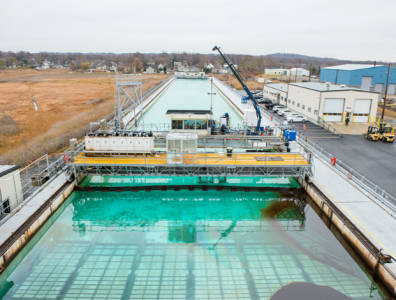 The sponge addresses a particular difficulty in offshore clean-up efforts: how to collect dispersed oil under the surface?

The foam doesn’t just absorb like a traditional sponge, it can also be wrung out like one. This not only means the oil can be recovered, but also that the Oleo Sponge can be reused, and reused again.

Volume of oil released into the Gulf of Mexico3.19 million barrels

Last week, a new type of foam called Oleo Sponge made global headlines. Because of a novel surface chemistry, the foam has proven very effective in absorbing oil from water. With many fearing the Trump administration’s oil and gas deregulation drive will increase the risks of spills, a rapid commercialisation of Oleo Sponge seems a given.

The material was invented by the Department of Energy’s Argonne National Laboratory, and made public last Monday. The sponge addresses a particular difficulty in offshore clean-up efforts: how to collect dispersed oil under the surface?

When crude spills into a body of water, as happened following the Macondo blowout in the Gulf of Mexico in 2010, containment booms can be deployed to contain the slicks that form when the oil reaches the surface. There it can be skimmed or removed through in situ burning.

A third clean-up method uses chemical dispersants to breakdown the oil into particles so that leftover oil can mix with water, evaporate or be degraded by bacteria. However, this method is known to cause so-called marine snow – a shower of particles that can potentially be hazardous to deep-sea and seafloor ecosystems. Studies conducted following the BP oil spill have also shown the oil-dispersants mixture to be more toxic than the spilled crude.

Not all oil sinks to the bottom. At times, the use of dispersants will create long plumes that remain suspended midway between the seafloor and surface. In August 2010, four months after the Macondo spill began, scientists discovered a 35-kilometre oil plume at a depth of around 90 metres.

The Oleo Sponge can absorb and collect oil mid-water and from the surface.

The Argonne scientists already had molecules to attract oil, but had yet to devise ways to bind them.

The researches used polyurethane foam, the surface of which, using a technique called sequential infiltration synthesis, was then infused with hard metal oxide atoms.

“This serves as the perfect glue for attaching the oil-loving molecules, which are deposited in a second step; they hold onto the metal oxide layer with one end and reach out to grab oil molecules with the other,” the Argonne National Laboratory wrote in a press release.

It also means the material can be infused with a different molecule to absorb other substances. “The technique offers enormous flexibility, and can be adapted to other types of cleanup besides oil in seawater,” Argonne chemist Jeff Elam said in comments.

The foam doesn’t just absorb like a traditional sponge, it can also be wrung out like one. This not only means the oil can be recovered, but also that the Oleo Sponge can be reused, and reused again.

“The material is extremely sturdy. We’ve run dozens to hundreds of tests, wringing it out each time, and we have yet to see it break down at all,” said co-inventor Seth Darling.