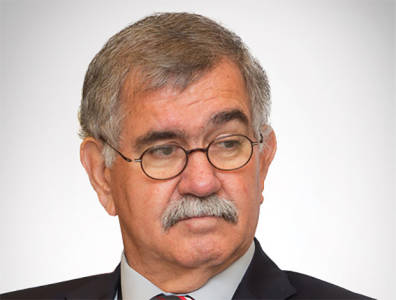 [Angola’s recent projects] will allow us to maintain production [levels] until 2020, and the next challenge will be to bring on new projects to compensate for the anticipated decline after 2020.

Jorge de Abreu, the executive administrator of Sonangol, talks to TOGY about the onshore bid round and the importance of communication with investors. The Angolan NOC announced the cancellation of its onshore bid round Wednesday, citing the change in market conditions since it was launched in 2014.

Sonangol said the viability of the oil concessions had been negatively impacted by lower oil prices as well as the global and national economic situation, adding that the terms of reference would not be profitable in the near term but changing them would harm the transparency of the process.
The onshore bidding round was launched in February 2014 . Ten blocks, three in the lower Congo Basin and seven in the Kwanza Basin, estimated to hold on average 700,000 boe, were on offer. The bidding round had been intended to give Angolan companies a chance to enter the upstream sector, and the pre-awarded acreage had been allocated mainly to smaller and local companies.

• On the onshore bid round: “This process was started in 2013, when both the industry and Angola were in different circumstances. The expectations for minimum requirements were based on the context when they were defined.”

• On investors in the onshore blocks: “We want this to be a sustainable operation for the future. When we look at the current situation of local companies that are active in the market in both onshore and offshore operations, we see the difficulties they face just to survive.”

• On communication: “We have to communicate about what we are doing, what our objectives are and where we are in the process. There are many expectations among our stakeholders, and we need to attract other companies.”

• On gas potential: “This exploration for gas is also an opportunity to relaunch exploration in the Kwanza Basin, learning from the past when it comes to the geological conditions, costs and contractor strategy.”

The state-owned oil company Sonangol oversees exploration and production and is the concessionaire, while also being active as an operator through its exploration and production subsidiary Sonangol P&P. However, in April 2016, the Ministry of Oil announced that the NOC would be restructured. De Abreu went in depth about the coming changes to the company, the onshore blocks and the outlook for production in the country.
This is an abridged version. For the full interview, see our business intelligence platform, TOGYiN.

How will Sonangol’s restructuring impact the industry?
Sonangol is engaged in this process to give the industry a better reputation and framework in which to work in Angola. The role of the concessionaire will be separated from that of the NOC.
Moreover, the subsidiaries of Sonangol that provide services for the oil sector will be separated, and the other roles Sonangol holds in the banking system, health system and some real estate companies will be organised in another holding.
This is the objective of this transformation and, when it is in place, the role of each of the entities in the oil industry will be clearer and more transparent, especially when each has a different board with an independent budget. Today we have a big entity with sometimes conflicting interests.

Does Sonangol have a timeline for the development of onshore blocks?
This process was started in 2013, when both the industry and Angola were in different circumstances. The expectations for minimum requirements were based on the context when they were defined. Then, prices, access to capital for investment and general processes changed, so we are evaluating whether or not such expectations are realistic with companies facing difficulties with access to financing.
Our view is that it will be very difficult to respect those engagements from the companies to develop this programme. Many are local companies, and it is their first experience in exploration. This is where we are today, and we need to make the final decision on whether or not to pursue this process or try to negotiate these blocks under other conditions and within a legal framework adapted to the current situation.
We know that companies are anxious. Some of them made investments and want to see a return, but we want this to be a sustainable operation for the future. When we look at the current situation of local companies that are active in the market in both onshore and offshore operations, we see the difficulties they face just to survive.

How can Sonangol ensure that production levels in Angola are maintained despite the financial and operational challenges in the country?
Production in Angola has been steady, with current production being the result of investments that were made a few years ago. We are at the end of a cycle that will generate production through 2019 or 2020. Some of those projects have already seen first oil, like East Hub in Block 15/06 and Mafumeira Sul in Block 0. In the coming years we also will see first oil from Kaombo in Block 32. This new production will allow us to maintain production [levels] until 2020, and the next challenge will be to bring on new projects to compensate for the anticipated decline after 2020.
One of the roles of Sonangol is to promote investment and negotiate new projects, either for exploration or for new development. We are currently in the process of implementing the legal instruments for the development of mature fields, published in June 2016. Decree 02/16, which establishes contractual and fiscal flexibility, will allow the development of some of the fields that are currently considered marginal.
Many fields were developed in most of the blocks that we have explored in Angola, but due to a combination of size, geographical situation, technical complexity and cost, there are also many fields that were never developed. We have known about these fields for 20-30 years, and they have passed through numerous economic cycles, which shows that they will not be developed easily.
The legal framework itself has some details that need to be worked on to make it more easily applicable. Solving the practical issues to ensure the feasibility of producing from these fields will lead to a few opportunities for barrels. We are working on this, and we will be working with our partners in the Executive Council to adapt it to today’s needs.

For the full version of this interview and more information on Sonangol, such as the coming restructure or the cancellation of the onshore bid round, see our business intelligence platform, TOGYiN.
TOGYiN features profiles on companies and institutions active in Angola’s oil and gas industry, and provides access to all our coverage and content, including our interviews with key players and industry leaders.
TOGY’s teams enjoy unparalleled boardroom access in 34 markets worldwide. TOGYiN members benefit from full access to that network, where they can directly connect with thousands of their peers.