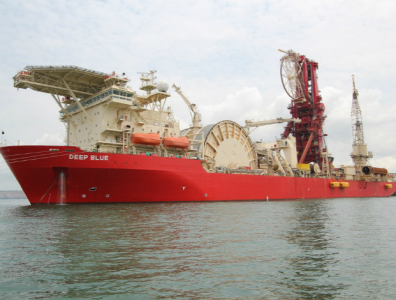 In April 2014, a consortium of France’s Technip and the Netherlands’ Heerema Marine Contractors won a $3.5-billion engineering, procurement, construction, installation and pre-commissioning contract for Total E&P Angola’s Kaombo oil project in block 32. Technip has a 55-percent share of the contract, which includes the subsea umbilicals, risers and flowlines for the 2,000-metre-deep offshore site. Heerema holds the remaining 45 percent.

The contract includes the engineering, procurement, fabrication, transport and installation of 18 single-top tension rigid risers with 40-metre-high, 6-metre-wide buoyancy tanks, flexible-top riser jumpers and riser base spools as well as about 300 kilometres of injection pipelines and rigid pipe-in-pipe production lines.

OUT OF THE BLUE: Technip and Heerema will also transport and install about 115 kilometres of umbilicals, manifolds, well jumpers and flying leads supplied by Total E&P as well as additional subsea structures, piles and steel jumpers. Technip’s Deep Blue vessel will lay all of the pipe aside from the production lines and rigid risers.

“The projects Technip Angola has been doing in Angola up until now have not been deep subsea types of projects. However, with our new block 32 project Kaombo, which is an ultra-deepwater project, we will be using advanced technologies for pipe installation,” Technip’s country manager Benoit Verdier told TOGY.

MAKE THE CONNECTION: Total also awarded an umbilical contract to a consortium of two of Technip’s subsidiaries, wholly owned Duco and majority-owned Angloflex, in which Sonagol holds 30 percent. The contract, valued between €250-500 million, includes the engineering, procurement and fabrication of 120 kilometres of umbilicals. Deliveries are set to begin in 2016. Verdier said, “Technip Angola has been moving from being purely an engineering company to an engineering, procurement and construction company, and that is how we have been increasing our revenue over the last five years.”

Days before the two contracts were signed, Total announced that it would cut costs on the project, which aims to pump 230,000 barrels of oil per day starting in 2017 – by 20 percent – down to a total of $16 billion.

ON BASE: In the first quarter of 2014, Technip Angola signed a contract with Italy’s Eni for the transport and installation of flexibles and rigid pipelines it had supplied the company at block 15/06. The rigid flowlines were manufactured at the company’s base in Dande and will be installed by its Deep Pioneer and Deep Energy vessels.

In February 2014, super-major Chevron awarded Technip the 85,000-workhour front-end engineering and design project for Greater Longui Area development, which will include a wellhead platform and a processing and compression platform. Also in the first half of 2014, Technip Angola completed a detailed engineering project for Chevron’s $5.6-billion Mafumeira Sul project, which includes 50 wells, two wellhead platforms a central processing and compression facility and more than 120 kilometres of subsea pipelines in 60 metres of water.