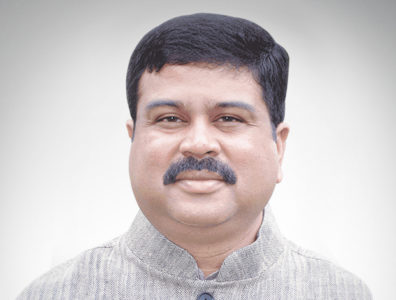 India is witnessing a true dichotomy. It is the fastest-growing energy consumer in the world, and our per capita energy consumption is one of the lowest. The kind of strategic plan Prime Minister Modi is unveiling is a second green revolution.

Projected reduction in energy import by 2022:10%

Amount of households in India:270 million

Amount of households in India supplied with LPG:172 million

TOGY talks to Dharmendra Pradhan, minister of state for petroleum and natural gas, about new state policies that directly affect the hydrocarbons industry, the government’s plans to bolster all aspects of industry in light of rapidly growing demand and the new face of India for interested investors.

What are the benefits of the new exploration and licensing policy approved by the ministry in early 2016?
There are four basic features of the Hydrocarbon Exploration and Licensing Policy (HELP): the first is open acreage; the second is the single-licence system or the uniform licence for conventional and non-conventional hydrocarbons; the third is a revenue-sharing-based model; and the fourth is marketing and pricing freedom for crude oil and natural gas.
Even though with the previous bidding mechanism, known as NELP [New Exploration Licensing Policy], pricing and marketing freedom existed, it was a little less clear. We want to re-establish that there will be marketing and pricing freedom under the HELP. Additionally, the shift from a profit-based to a revenue-based scheme will be revolutionary. This is a combination of good business and transparent public policy making.

Besides bringing more transparency, what other benefits does the HELP scheme bring to international investors?
Previously, if you were investing in a block in the Indian market and you were extracting oil and gas at the same time, you had to have multiple licences. Manifold sources of hydrocarbons are one of the challenges of India’s fields. If you’re extracting shale or coal bed methane, you were previously not allowed to produce them under the same licence.
However, under the HELP policy, if you are extracting any kind of hydrocarbons, you are free to produce them under a single licence, which notably eases procedures.

What role does the government play in incentivising domestic upstream investments?
Price and marketing freedom are the greatest incentives for an investor. Prime Minister Narendra Modi has put forward the philosophy of minimum government, maximum governance. In line with this philosophy, the government wants to get away from the day-to-day monitoring of businesses.
The investor should be the one who is primarily responsible for his own investment. He should plan how to monetise projects, how to do this cost-effectively and what timetable he will follow to carry out his activities. It’s up to the investor; the government should not get involved in the minute details of his investment.
The government should be concerned with two things: the safety and security of the reserves and how much revenue the investor shares with the government.

What is the Ministry of Petroleum and Natural Gas doing to decrease crude oil and natural gas imports?
India as a country imports a substantial chunk of its energy. At the same time, we are targeting to reduce our import dependency by 10% by 2022. This is an important year for us because it marks the 75th anniversary of India’s independence.
We have a two-pronged strategy: we will augment our existing production and at the same time substantially supplement our environment with biofuels. This will create a new agrarian commodity that will contribute to the economy of our country.
We will use technology to convert waste and biomass into CNG and ethanol. The technology has now been tested, and we can achieve 25% blending. In this way, we can replace a substantial portion of our imports with biofuels. We are also diversifying import sources of energy. We have imports from Latin America, Africa, Central Asia, Iran and the Gulf countries.

Could you describe the government’s GiveItUp campaign aimed at reducing LPG subsidies?
India has been making a deliberate effort to develop its LPG market since 1960. Today, India has around 270 million households, and we are supplying LPG to around 172 million of them.
In the Indian market, LPG is subsidised for household domestic consumption. However, we want to make the system work more effectively. Prime Minister Modi has initiated a plan to find a way to link the subsidy directly to the consumer, rather than to the product.
The way we were operating previously was that the subsidy was incorporated into the price of the product. Now, we are not offering the subsidy upfront. The consumer has to buy the product at the market rate, and those consumers who are eligible and ask for a subsidy will have the amount deposited directly into their bank accounts. This is called a Direct Benefit Transfer, or DBT.
India has the biggest programme of this kind in the world. Around 159 million people are opting for a subsidy through this DBT route. It has been acknowledged by the Guinness Book of World Records. In the past year, we have already transferred USD 5 billion to consumers using the DBT model. At the same time, we want these subsidies to become more targeted. Out of 172 million consumers, 159 million are receiving subsidies.
What about the other 13 million? Under the GiveItUp LPG scheme, launched in March 2015, Prime Minister Modi made a countrywide appeal for those citizens who have the means to pay their bills from their own pockets not to ask for subsidies. In one year, more than 10 million people have given up their subsidies voluntarily. This programme is the only one of its kind in the world, and is the second feature of the LPG campaign based on volunteerism.
There is a third factor. If we ask who is affected by LPG, one way or another – either through not having it or by getting alternative cooking energy from biomass or other sources – the answer is women. About half a million women die every year in India due to domestic pollution on account of use of noxious fumes used for cooking purposes. Children also are adversely impacted by this.
The government is supplying the bottom of the pyramid with fast LPG connection from its own budget by providing concessional LPG to households below the poverty line and by continuously investing in the enhancement of energy infrastructure. In the case of families that are below the poverty line, the government will cover the cost of the initial connection, the cylinder regulator, pipes and other administrative fees from its own budget. The balance cost can be borne by the beneficiaries through an EMI [enterprise management incentive] scheme, to be adjusted against the subsidy. In this way the government is planning a massive expansion of LPG connectivity in the rural parts of India.
Over the next three years, 50 million new connections will be given to poor households. Our priority will be the areas where there is a low LPG penetration and women-headed households below the poverty line. This will produce big dividends for health and the environment as well as empower women.
Traditional ways of cooking food cause pollution and are very time-consuming. With this kind of LPG network, women will be relieved. They will have more time for education and for professional work, and will benefit from lower health expenditures. This programme is in line with the engagements India made during the COP21 in Paris.
In summation, these are the four aspects of our LPG programme: creating a modern network, generating employment, targeting subsidies and consumers as well as investing money in poor households.

What are the benefits of the government’s new Sagar Mala project for the energy industry?
The oil and gas industry provides substantial business to India’s ports. The hydrocarbons industry provides 35-40% of the port business in India. The Sagar Mala project is set to create smart, modern and futuristic port management.
The hydrocarbons industry will be a major beneficiary of the project. Our logistics costs will be reduced, and we will be able to supply cheaper products to our consumers. The aim is to invest in infrastructure, including LPG terminals, LNG terminals and modern unloading mechanisms in ports, as well as increase the bulk of transportation.

What are the key objectives of India’s long-term hydrocarbons vision?
India is planning a comprehensive energy roadmap, a New Energy Policy (NEP), divided into several verticals. The government has also taken a bold stand on renewable energy since we want to diversify our energy basket. Energy should be clean, it should be environmentally friendly and it should be affordable.
There are different strata of consumers in the Indian market: high-income people, middle-income people and low-income people. All of them require energy. In a welfare state, the government has a role in providing energy to everyone.
India is witnessing a true dichotomy. It is the fastest-growing energy consumer in the world, and our per capita energy consumption is one of the lowest. The kind of strategic plan Prime Minister Modi is unveiling is a second green revolution. The government is also opening up the food processing sector to FDI, which is a 100% Indian sector. This will further increase energy demand.
In terms of energy security, we are looking at strengthening ties with Iran, Saudi Arabia, Central Asia, Latin America and Africa. We want to diversify our sources. So it is not just about 2025. India has a vision that looks significantly far ahead, and we are preparing our NEP accordingly.

What would be your message to the international community coming to invest in India’s hydrocarbon industry?
I appeal to the investors of the world; India has a unique advantage. It is the highest consumer of energy and has a low per capita connection to energy sources. This country is destined to grow and is also an intellectual, thinking society. When a society decides to grow, nobody can stop it, and one of the primary preconditions of growth is energy.
I invite stakeholders from the whole world in the energy business to come here. You have a democratic government and leader in the person of Prime Minister Modi. Your investment will be safe in a transparent system of rules and policies. Your investment will not be in jeopardy. You have a market, a transparent business model and a determined government. Come and invest!