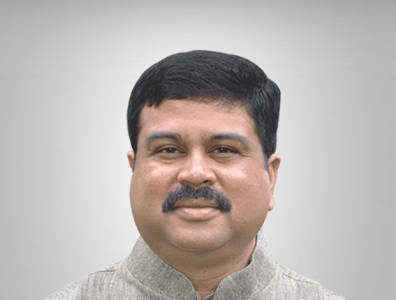 India’s 26 sedimentary basins have not been exploited to optimum levels, and we plan to encourage exploration of them.

New Minister of State of Petroleum and Natural Gas Shri Dharmendra Pradhan tells TOGY about India’s under-exploration of its sedimentary basins and efforts to reverse its stagnating oil and gas production. India is the fourth-largest energy consumer in the world and the government is surveying its energy resources in the hop of reducing imports.

How is the new government of India addressing oil and gas investors’ concerns?

Despite the government’s policy of allowing 100-percent foreign direct investment in the country’s oil and gas industry, international investors have been reluctant to invest in India. Major hindrances included a policy blockade and a lack of clarity on major regulations such as production-sharing contracts, pricing of commodities and subsidy mechanisms.

Prime Minister Narendra Modi’s government is committed to implementing an operational framework that will incentivise domestic exploration and production through appropriate fiscal policies and incentives, a transparent and stable regulatory regime, a reliable monitoring mechanism and a facilitating business environment.

The Ministry of Petroleum and Natural Gas is taking measures to advance along those fronts. In October 2014, the government deregulated diesel and declared a revised formula for pricing of domestically produced gas.

How does the government plan to encourage more exploration of India’s sedimentary basins?

India’s 26 sedimentary basins have not been exploited to optimum levels, and we plan to encourage their exploration through several measures including the improvement of infrastructure, logistics, technology, data, security and workforce skills. We are taking in-principle statutory clearances from the Ministry of Environment and Forest and the Ministry of Defence, Ministry of Home Affairs for all the blocks identified for offer in the next round of bidding as well.

Exploration is the cornerstone for enhancing domestic production in India. Out of the more than 3 million square kilometres of the Indian sedimentary basins, geo-scientific data on nearly 48 percent of the basins is either scarce or unavailable. To help in identification of new and unexplored areas with hydrocarbon prospectivity, a project to survey nearly 1.4 million square kilometres in the next five years has been approved.

In addition, a project to reassess our hydrocarbons resources based on the geo-scientific data generated over the past few decades has begun. A national data repository will soon be functional.

We are also implementing a multi-client speculative survey policy wherein service providers have applied to survey the offshore areas of India. All the geo-scientific information will definitely incentivise operators to invest in India and explore the Indian sedimentary basins.

How important are unconventional resources?

According to the Directorate General of Hydrocarbons, the predicted CBM resources in the country are to the tune of 92 tcf (2.6 tcm). We have to tap and monetise every possible source of energy in unconventional hydrocarbons.

India’s shale gas reserves could be anywhere between 300 tcf (8.5 tcm) and 2,100 tcf (59.5 tcm). While CBM production is already underway, under the current agreement exploration of shale gas is being carried out by Oil and Natural Gas Corporation (ONGC) and Oil India Limited. The first shale well was drilled by ONGC in Jambusar (Cambay Basin) in November 2013.

A new uniform licensing policy is on the anvil that will allow unconventional hydrocarbons in a block to be harnessed along with conventional resources. The National Gas Hydrate Project 2 has been launched to collect more reliable data on gas hydrate with an aim to exploit them.

How is the gas supply deficit being addressed?

The government has adopted a two-pronged strategy to address the gas supply deficit. On one side, India’s gas production will be increased. ONGC will raise its gas production by more than 80 percent by the year 2019.

Infrastructure to import greater volumes of LNG will also be built. These include setting up new LNG terminals, raising the capacity of existing LNG terminals and expansion of the gas grid.

India’s LNG re-gasification capacity is 22 million tonnes per year. The targeted yearly capacity from 2015 to 2016 is 25 million tonnes and 32.5 million tonnes from 2016 to 2017. LNG terminals have been proposed on both the east and west coasts of India, and some of these projects, such as Kakinada and Ennore, have reached advanced stages of the planning phase.