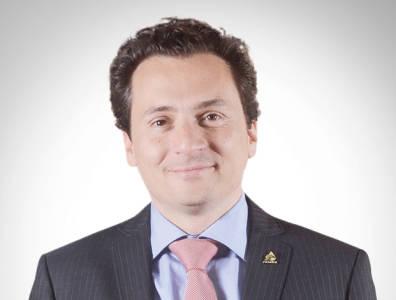 "This has been Pemex’s most important corporate reorganisation since its inception almost eight decades ago."

A new energy era in Mexico

As CEO of Pemex, Emilio Lozoya Austin is steering the national oil company through a time of market adjustment, corporate restructuring and some of the lowest oil prices in recent history. Lozoya tells TOGY about how Pemex plans to emerge from this perfect storm stronger and more streamlined than ever before.

To what extent will unconventional resources contribute to Mexico’s hydrocarbons future?
Unconventional resources will play a major role in contributing to Mexico’s energy security, since we have the sixth-largest shale gas reserves in the world. The development of hydraulic fracturing and horizontal drilling, instrumental in the North American shale revolution, represent new opportunities we will surely exploit for Mexico.
Nevertheless, the exploitation of unconventional fields requires hundreds of wells drilled annually, which in turn demands an agile process for the deployment of human and material resources. In North America, smaller operations have contributed extensively to the success of the shale revolution, in a way that would be difficult for larger companies to follow.
These observations are instrumental in evaluating a suitable mode of operation and strategy regarding unconventionals. There is even debate concerning the feasibility of entering the shale gas business altogether. The bidding round for unconventional fields has already been delayed.

How is Pemex adapting to low oil prices?
Pemex has had to comply with the $4-billion budget reduction imposed by the Secretariat of Finance and Public Credit’s austerity programme announced in February 2015. We are hard-pressed to raise our productivity, still a top investment priority, while ensuring the flexibility of human resource management through offerings such as early retirement and training.
The steep budget cuts of 2015 have forced us to incorporate creative strategies. One such plan is to slow down the pace of project investment that we had planned for 2015. Rather than cancel the reconfiguration projects of three refineries – Tula, Salamanca and Salina Cruz – their execution timetables have been extended.

How do the bid rounds affect Pemex’s plans?
In Round Zero, participation was confined to Pemex, and the allocation of fields was designed to guarantee that the company continues to meet its production goal of 2.5 million barrels of oil per day through 2040. With the Round One tender underway, Pemex will be competing for blocks on an equal footing with international oil companies and domestic companies.
The bid rounds will also call for partnerships to be formed where appropriate. An example of this approach has been the Los Ramones Phase Two project, in which Pemex partnered with US investment firms Blackrock and First Reserve, as well as French gas infrastructure company Engie, formerly GDF Suez, to build a much-needed gas pipeline from the US to central Mexico.

How does Pemex intend to adapt to Mexico’s changing marketplace for oil and gas?
Pemex has been given until 2016 to transform itself into a “state productive enterprise,” the legal denomination created under provision of the energy reform. Under this title, Pemex will operate under business-oriented principles that include independent management from the federal government, flexibility in its financing operations and a new taxation bracket.
In November 2014, the board of directors approved the corporate restructuring of Pemex, in addition to the transformation of the company’s four existing subsidiaries into two new productive state-owned subsidiaries: exploration and production, and industrial transformation.
Five additional productive state-owned subsidiaries have also been incorporated that cover cogeneration and services, logistics, drilling and services, ethylene and fertilisers. Each of these five entities is expected to transition into a fully owned Pemex affiliate after one year.
This has been Pemex’s most important corporate re-organisation since its inception almost eight decades ago, and the change would not have been possible without the energy reform.