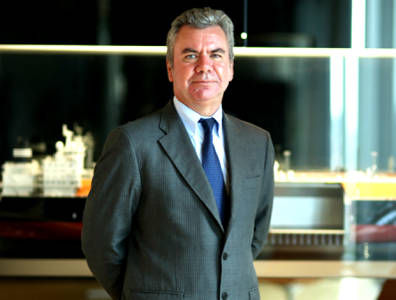 When looking at supply security, it is important to have a multitude of inputs into Singapore.

On the hunt: Sourcing gas from Africa and the Far East

Responsible for supplying Singapore’s Jurong Island with 3 million tonnes of LNG, BG’s Anthony Barker tells TOGY how he is dealing with a global LNG shortage as he hunts gas supply from Africa to Australia and the Far East. Barker is General Manger of UK-based BG Group’s Singapore office. In 2008, the company bid for and won a franchise to source long-term LNG for Singapore’s upcoming re-gasification terminal on Jurong Island.

What is unique about Singapore compared to other LNG markets?

Singapore does not have its own domestic hydrocarbons sources, or even any prospects for natural gas. The country has a fairly predictable long-term demand profile for LNG to supplement its piped gas supply. When you look at energy markets throughout the world, there is uncertainty about the future supply and demand balance. In Indonesia, Malaysia, Vietnam and Thailand, for example, there is uncertainty about domestic supply. Singapore, on the other hand, knows there are no domestic reserves and can plan accordingly.

What motivated Singapore to secure its own supply of LNG?

The global supply and demand for LNG is tight, and was tightening even before the 2011 earthquake in Japan. Thus, Singapore wanted a commitment to an exclusive supply of a resource that has been recognised as being in short supply. LNG is traded globally and is used far from where it is produced. According to BG Group’s analysis, LNG supplies will be tight until at least 2020 and beyond. From a supply side, we are hoping that East Africa proves as successful as its early indications. India is another large LNG importer and its domestic supply is not as great as was hoped. China is developing its own LNG terminals and increasing supply from its own sources.

When Singapore wanted to reach out and secure an LNG source in 2008, BG Group won the exclusive right to aggregate and contract the first 3 million tonnes of long-term LNG. Exclusivity sounds fine, but what BG Group actually bid to provide was the guarantee of supply without any commitment of when that would be taken up.

Is BG Group interested in contracting further supplies of LNG beyond the 3 million tonnes?

The primary objective is to market the first 3 million tonnes. The terminal needs to be constructed and finished on time with sufficient gas contracted to provide revenues to make that viable. Everyone, including BG Group and Singapore LNG (SLNG), has been focused on contracting long-term LNG but, like any gas market, LNG cannot be all long-term contracts. Singapore needs to decide how it is going to procure its next supply of LNG.

BG Group is looking to build on the business that it has established in Singapore. We recognise that Singapore may well elect to open up to competition. Competition is a way of enhancing security of supply and enabling regular discovery of market pricing. BG Group, as well as many others, would be looking to utilise Singapore’s terminal capacity beyond the first franchise volumes.

Who are the primary buyers of BG Group’s LNG?

We have a suite of approximately 15 contracts and 10 key purchasers that have underpinned the volume of gas that we supply. Many of our customers are long-established pipe gas customers that will begin to factor LNG into their supply portfolio. There are also some new greenfield independent power plants (IPPs) that will be purely LNG fuelled.

If you look anywhere in the world, the gas market and the power market are very closely linked. The power market tends to underpin gas infrastructure, and that example is even closer in Singapore. Currently, 90 percent of our volume, perhaps even 95 percent of our volume, is focused on the power generation sector. As the sales curve flattens and we approach 3 million tonnes, BG Group is signing up smaller companies with more diverse usage. For example, one of our customers is a desalinisation plant with a requirement to fuel internal auxiliary load. Having made a commitment to 3 million tonnes, we are close to fulfilling the franchise, and therefore Singapore is now considering its future LNG procurement strategy.

Where will the LNG be sourced from within BG Group’s portfolio?

Initially, it comes from our Atlantic basin and Egypt. However, in 2014, we will be opening up production in Australia, which will feature into our portfolio. Other suppliers relevant to Singapore may include Equatorial Guinea, Trinidad and Tobago and perhaps in the longer term East Africa. When looking at supply security, it is important to have a multitude of inputs into Singapore. With the Australia Queensland Curtis coal seam gas-to-LNG project coming online, BG Group is on track to reach its target for an LNG portfolio of 20 million tonnes per annum (mtpa) by 2015, up from 13 mtpa currently.

BG Group has also positioned itself to be a leading exporter of US LNG from advanced Gulf Coast projects. Relating to US supply, only one project has met full regulatory approval and is under construction, meaning that the first shipment of LNG out of the US is at least three years away. It remains to be seen how many US projects will eventually clear the hurdles of regulatory approval, finance and construction.

Is there interest among customers in buying LNG on short-term, spot-based contracts? What are the drawbacks of short-term contracts?

BG Group has been marketing contracts for short-term LNG, which are up to one year or as short as one month. Even before we began operations, Singapore was moving towards the dynamic spot market of short-term gas, and we are already seeing a lot of interest from customers for short-term gas. In fact, we expect short-term gas interest to be there from the terminal opening. One drawback of the short-term contract is that spot market pricing is much more volatile. People tend to make commitments to buying the gas three months out from when they expect supply. That activity will pick up as soon as the terminal actually becomes operational, and we expect short-term spot activity to increase appropriately.

How are the Jurong Island 2.0 expansion plan and the LNG terminal linked?

The LNG terminal is located on Jurong Island and it also feeds power plants that are there. A lot of that power is taken up locally as LNG feeds utility plants and is a basic feedstock for the processing plants on Jurong Island. The whole viability and expansion of Jurong Island is connected with energy security, and we are fuelling it from a diversity of sources almost directly into the point of consumption. By 2025, Singapore could become totally independent in terms of energy supply and not reliant on piped gas supply. Therefore, it will likely have a fully operational terminal on Jurong Island with a 15-million tonne facility that is focused on the domestic and regional market. The Jurong Island 2.0 expansion plan plays a large role in that vision.