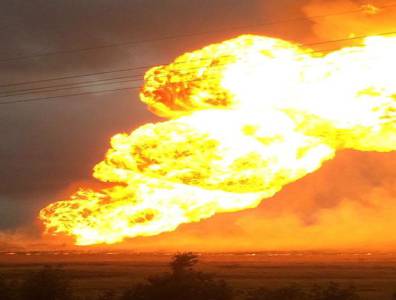 HOUSTON, June 15, 2015 – On Sunday, a natural gas pipeline ruptured and exploded causing a fire near the town of Cuero, South Texas, according local reports.

The massive column of fire was visible from more than 20 miles away after the pipeline exploded.

Seven homes were evacuated following the fire. No one was injured during the fire, according to reports by Associated Press.

A pipeline operated by the US natural gas and propane company Energy Transfer Partners was ruptured in Lindenau at around 8.30pm on Sunday, a spokeswoman with the DeWitt County Emergency Operations Centre told local media.

On early Monday morning the spokeswoman said that the gas had been rerouted and the fire was out.

Local authorities are investigating the incident, but no further details have been provided.

Energy Transfer Partners said on Monday it would begin repairs on the damaged section of the 42-inch gas pipeline and investigate the cause of the incident.