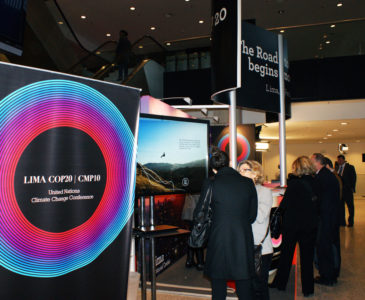 LIMA, December 8, 2014 – The United Nations Framework Convention on Climate Change, also known as the COP20, continues in Lima this week as leaders from around the world attempt to agree on solutions to pressing pollution and global warming issues.

However, in addition to global discussions, the convention has provided a platform for local leaders to speak out about local problems in Peru, with indigenous groups seizing the spotlight to call for far-reaching land reforms that could significantly impact Peru’s three major extractive industries: mining, logging and hydrocarbons.

Alberto Pizango, leader of AIDESEP, Peru’s largest federation of indigenous communities, called for 1,070 different indigenous communities in Peru’s Amazon jungle to be given titles to lands comprising more than 200,000 square kilometres, giving them the legal right to prevent illegal logging and mining in the territories, and more control over legal extraction processes.

Private companies in Peru’s oil and gas industry already complain of the Peruvian law requiring that developments have the prior consent of any native communities in the vicinity, as well as the complex system of environmental permitting that can require operators to have over a thousand separate approvals before commencing exploratory drilling. Further devolution of land rights to native communities would likely further complicate the permitting and approval process.