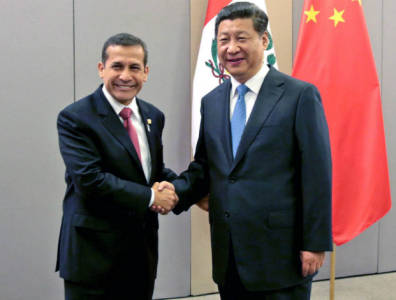 CNPC entered Peru in November 2013 when it bought Brazilian national oil company Petrobras’ assets in the country for $2.6 billion. This gave CNPC block X and exploration block 58, as well as a 46.16-percent stake in block 57, which is operated by Repsol. In May 2014, CNPC announced plans to invest $2 billion in developing these and other blocks in Peru over the next 10 years.

Block X, which contains areas that began production as early as 1912, holds mature fields and produces 16,000 barrels of oil equivalent per day.

The announcement of the new drilling plan follows a memorandum of understanding that was signed by Peru and CNPC at the 2014 APEC summit in Beijing, attended by both President Xi Jinping of China and President Ollanta Humala of Peru.

The memorandum states that the parties will intensify co-operation in exploration and production of oil and gas, also creating the possibility that CNPC will become involved in natural gas processing and petrochemicals in Peru.

EU says no FDI in Crimean oil
Next