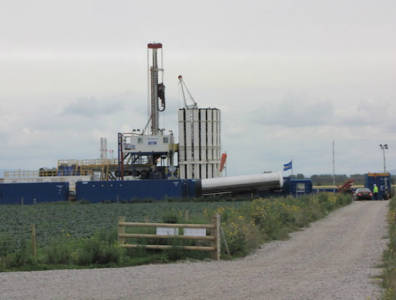 UK Communities Minister Sajid Javid overturned a local council decision regarding one of two sites Cuadrilla applied for. Javid has put off a decision on the second site to give the company time to come up with adequate evidence that road safety will be maintained.

The Lancashire-based company had previously been denied permission to drill for potential hydrocarbons at both sites by the Lancashire county council. The council cited concerns over visual impact and increased road traffic. Cuadrilla quickly submitted an appeal.

The company’s chief executive Francis Egan responded to the decision on British national television Thursday, citing the need for the UK to be energy-independent. “The country needs gas. The country is running out of gas, and without some form of energy development, we’re going to end up importing all of our fuel from overseas,” he said.

Cuadrilla’s plans sparked a debate over hydraulic fracturing across the UK. The decision to grant permission to the company has been met with outrage by environmentalists, prominent journalists, and the Lancashire council. A recent UK government opinion poll found that 31% of people interviewed were opposed to “fracking,” as hydraulic fracturing is known.

However, other hydraulic fracturing companies will likely view the decision positively as it suggests that more of the country’s potential resources may be open to exploration in the future. Also this year, Third Energy UK Gas was granted permission to hydraulically fracture a well in northern Enfland. Cuadrilla itself claims there may be 200 tcf (5.7 tcm) of natural gas in its Lancashire licence area.

ELN hit line as Colombia tries to save FARC deal
Next